How Much Is Home Depot Worth? 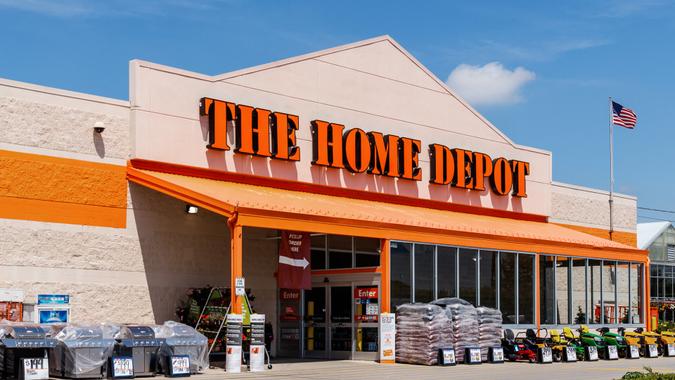 The Home Depot offers customers a convenient way to purchase home improvement tools and supplies from over 2,300 locations in North America. A household name among craftspeople, builders and do-it-yourselfers, The Home Depot often beats its main competitor, Lowe’s, in terms of value. In 2021, Visual Capitalist listed both companies among the world’s most valuable brands, with The Home Depot brand valued at $70.5 billion and Lowe’s valued at $20.7 billion. The numbers listed below can help explain why The Home Depot is so popular.

Market capitalization is determined by the total dollar value of a company’s outstanding shares, which helps investors determine the relative size of a company. Over the past year, The Home Depot’s market cap fluctuated with the number of shares outstanding and the share price. At the current $308.45 share price, The Home Depot’s market cap is $322.25 billion.

Based solely on The Home Depot’s revenue and profits from the last three years and its assets and debts, The Home Depot is worth over $131 billion.

The Home Depot’s value rose fairly steadily beginning in 2011, as the housing market recovered from the crash. After a brief dip in March 2020, when the economy shut down due to the pandemic, the share price climbed to an all-time high closing price of about $415 in November 2021, thanks to a strong housing market. Shares have lost about 25% of their value since then and were trading at $308.45 when the market closed on Feb. 23.

During the earnings call following the release, Home Depot executives told analysts that the company is being challenged by inflation and supply-chain bottlenecks, CNBC reported. Ted Decker, the company’s chief operating officer and soon-to-be-CEO, noted stores are experiencing something “not dissimilar to a storm environment,” with home professionals grabbing up merchandise as soon as it hits the shelves. Chief Financial Officer Richard McPhail told CNBC that demand is also on the rise among homeowners, as they invest in renovations and remodels amid increasing real estate values. Suppliers, he said, are having trouble meeting demand.

Looking ahead to the first quarter of 2022, Home Depot’s guidance said the company anticipates sales growth and comparable sales to be slightly positive and diluted earnings-per-share growth to be low single digits, which CNBC reported is about in line with analysts’ forecasts.

Founders Bernie Marcus and Arthur Blank first conceptualized The Home Depot in 1978 based on their own experience as DIY enthusiasts. After securing the proper financing, they opened the first two stores in Atlanta in 1979, and the company went public in 1981. The Home Depot often contributes to philanthropic causes through The Home Depot Foundation, in particular, projects for veterans that include pledging money to veteran-related causes.

The Home Depot announced in a Jan. 27 press release that CEO Craig Menear will step down from that role on March 1. His replacement is Ted Decker, who joined the company in 2000 and has served as president and chief operating officer since October 2020.

The Home Depot’s investment makeup is similar to its rival Lowe’s. Big banks like Bank of America have a stake in the company, and investment company The Vanguard Group Inc. is — like it is for Lowe’s — The Home Depot’s largest shareholder, with 93,202,329 shares — 8.93% of total shares — as of February 2022.