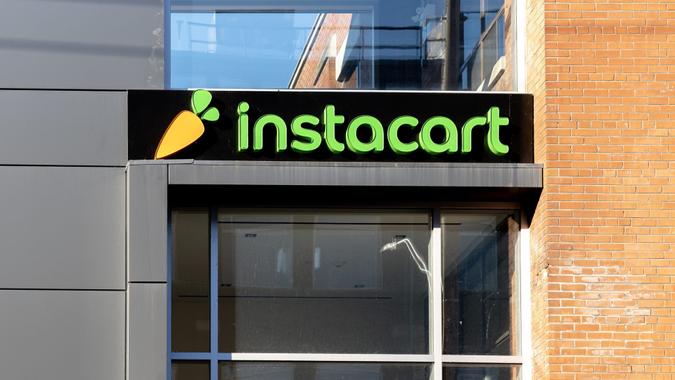 In a storyline reminiscent of fellow pandemic darlings like Peloton and Zoom, Instacart slashed its valuation by 40% to $24 billion, as the food-delivery company sees its growth decelerating.

“Our team built Instacart into the market leader it is today, and we believe investing in them is the right thing to do,” Instacart said in a March 24 statement. “Markets go up and down, but we are focused on Instacart’s long-term opportunity to power the future of grocery with our partners.”

Bloomberg reported that the prospect of higher interest rates, inflation and a potential recession also weighed on its lowered valuation, adding that the food-delivery startup hopes the move will help it attract talent and adapt to market conditions. Still, according to a person familiar with the matter, Instacart boosted its revenue by 20% to $1.8 billion in 2021, Bloomberg reported.

Instacart benefited from the pandemic, and in March 2021, it raised $265 million as part of a new financing round from existing investors including Andreessen Horowitz, Sequoia Capital, D1 Capital Partners, Fidelity Management & Research Company LLC, and T. Rowe Price Associates. This had increased the company’s valuation to $39 billion, according to an announcement on its website.

Nick Giovanni, Chief Financial Officer at Instacart, said in the announcement at the time that the fundraising “reflects the strength of Instacart’s business, the growth our teams have delivered and the incredible opportunity ahead.”

He added, “This past year ushered in a new normal, changing the way people shop for groceries and goods. While grocery is the world’s largest retail category with annual spend of $1.3 trillion in North America alone, it’s still in the early stages of its digital transformation. As online grocery penetration increases over the coming years, we’ll continue to invest in our people, products and partners to support all of the communities we serve.”

Peter Cohan, a senior lecturer at Babson College and author of “Goliath Strikes Back,” told GOBankingRates that Instacart’s valuation plunge is much more than the drop in valuation of its publicly-traded peers. For example, DoorDash stock is down 12% in the last year, Shopify is down 33% and Meta Networks, 21%.

“Instacart’s ability to retake its previous high valuation depends on two things. The first is how well it can come up with new sources of revenue to offset the decline in online grocery ordering as the pandemic wanes. The second is whether it can lower its fees to satisfy grocers’ complaints and offer them new services for which they are happy to pay Instacart.”

What’s interesting is, Instacart launched new initiatives for ultra-fast delivery earlier this week, according to Yahoo! News, and there’s a lot of buzz about an IPO at some point this year.