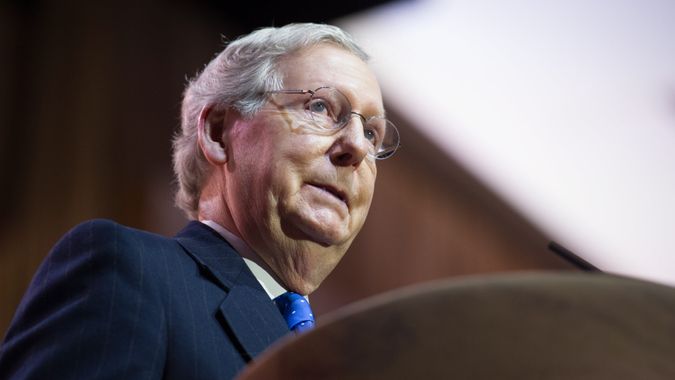 It’s a pretty safe bet that Mitch McConnell is not a fan of those who criticize Georgia’s new voting law. On Monday, the Senate Minority Leader issued a blistering attack that warned of “serious consequences” for businesses that push back against the law, which opponents say suppresses the vote and unfairly targets Democrat and minority voters.

See: Do You Think the Minimum Wage Should Be $15? Take Our Poll
Find: MLB Pulls Out of Georgia Over Restrictive Voting Law

In a statement posted on his website Monday, McConnell said, “We are witnessing a coordinated campaign by powerful and wealthy people to mislead and bully the American people.” The statement went on to say, “Our private sector must stop taking cues from the Outrage-Industrial Complex. Americans do not need or want big business to amplify disinformation or react to every manufactured controversy with frantic left-wing signaling.”

As reported by Forbes on Monday, McConnell’s statement came in response to companies such as Delta, Coca Cola and Major League Baseball that have spoken out against the law, which was written by the Republican-led Georgia legislature and signed into law last month by Republican Gov. Brian Kemp. The law imposes numerous new restrictions on voting, though Republicans refute the notion that it unfairly suppresses votes.

“Corporations will invite serious consequences if they become a vehicle for far-left mobs to hijack our country from outside the constitutional order,” McConnell wrote in his statement. “Businesses must not use economic blackmail to spread disinformation and push bad ideas that citizens reject at the ballot box.”

His words probably won’t get much love from opponents of the law, who call it an attack on voting rights that aims to suppress a minority vote that helped President Joe Biden win Georgia and also gave Dems two U.S. Senate seats in the Peach State, as The Washington Post noted on Monday.

Many business leaders have been vocal about their opposition to the new law. This has led some Republicans, including former President Donald Trump, to call for a boycott of MLB, Coca-Cola, Delta Airlines, JPMorgan Chase, ViacomCBS, Citigroup, Cisco, UPS, Merck and other companies that have criticized the law, The Atlanta Voice reports.

MLB recently announced that it would move this year’s All-Star Game out of Georgia to protest the law.