This Is the Only State Where Gun Sales Fell Last Year 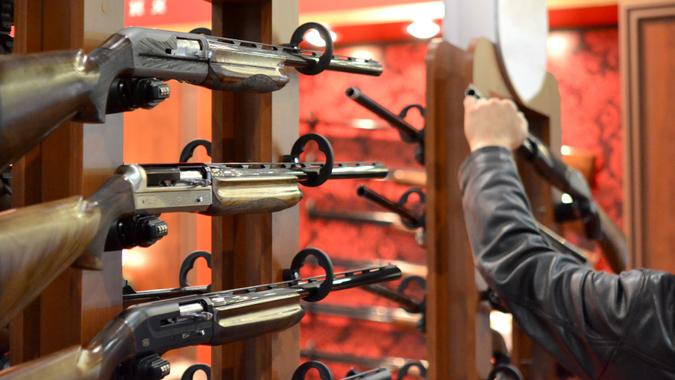 Gun sales in the United States rose 40% last year to 39,695,315. The figure represents the high water mark in gun sales since the current record-keeping system went into effect. Increases by state varied substantially. In at least one state, sales more than doubled.

The Federal Bureau of Investigation tracks gun sales and publishes a list of how many are handled as part of its National Instant Criminal Background Check System. Each month, the figures are reported by state. Nearly everyone put through this system qualifies as a buyer. People who are excluded usually have criminal records. Of the more than 300 million checks that have been done since 1998, there have only been 1.5 million denials. Therefore, the data is the best proxy for U.S. gun sales available.

Growing civil unrest may have prompted people to buy guns for personal and family protection, many social scientists have posited, although this remains a matter of debate. Another theory is that chaos brought on by the COVID-19 pandemic is a major cause. A new U.C. Davis School of Medicine study about fear of violence reports: “The coronavirus pandemic has exacerbated persistent structural, economic and social inequities in the conditions that contribute to violence and its consequences.”

Who bought these guns? CBS News pointed out that over 5 million people were first-time gun buyers last year. CNN reported a sharp rise in sales to Black Americans and women. “Sales to women are also up 40% through September when compared with the same period last year,” the news network pointed out.

Gun sales only fell in one state last year. The figure stands out, particularly because gun sales in three states rose by over 100% in 2020. In every other state, they were higher by at least 20%.

Gun sales in Kentucky fell 19.2%, for some unexplained reason, from 4,120,892. By some measures in the state, gun permits rose, but the FBI data show a large erosion.

Gun purchase behavior continues to be poorly understood but hotly debated, which means a definitive answer won’t be forthcoming. Suffice it to say, the extent of the rise in most states and falloff in Kentucky begs a whole series of larger questions about why Americans would buy almost 40 million guns in one year.

24/7 Wall St. is a publisher partnering with GOBankingRates.
Learn More