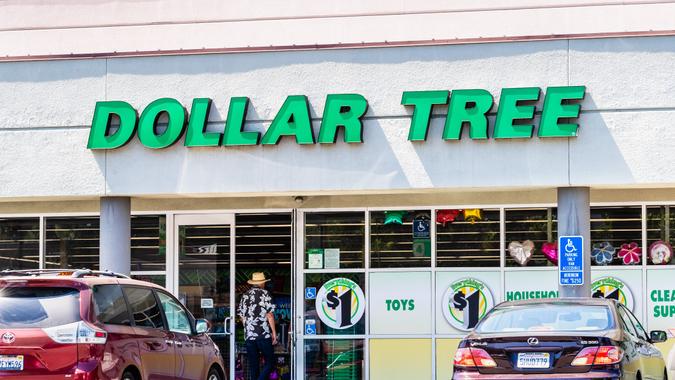 Most people have heard the adage “you get what you pay for,” and when shopping at discount dollar stores, that may involve getting some unwanted chemicals in your purchased product.

See: Surprising Things You Can Buy With Food Stamps
Find: This Credit Score Mistake Could Be Costing Millions Of Americans

Though the items at shops like Dollar Tree and Dollarama seem like a great deal, they’re not always great for you. In 2019, Dollar Tree was hit with a warning letter from the FDA claiming that the retailer was selling illegal over-the-counter pharmaceuticals and cosmetics from foreign manufacturers — products that had not been made to meet strict FDA regulatory standards.

Snopes has also reported that dollar stores often sell toothpaste not regulated by the American Dental Association. And, as GOBankingRates previously reported, electronics accessories and kids toys can often pose problems such as damaging your devices or causing harm or injury to children.

Now, a new report published by Canadian watchdog agency Environmental Defence warns that many items found at Dollar Tree and Dollarama contain harmful chemicals such as toxic levels of lead, cadmium and antimony. As they reported, “Up to 30% of products tested at Dollar Tree and [up to 25% at] Dollarama contain heavy metals such as lead and other toxic chemicals such as phthalates, bisphenols and PFAS or ‘forever chemicals.'”

The unwanted additions were found in children’s toys as well as canned foods — and even microwave popcorn. As Environmental Defence noted, earbuds found at Dollar Tree had more than 8,000 times the legal level of hazardous lead. As well, all food cans tested contained toxic chemicals, “60% with BPA, 40% with PVC and polyester resin,” and packaging for the microwave popcorn revealed PFAS. Even the cash register receipts that the agency tested contained bisphenol-S (BPS).

As noted by the agency, the unwanted chemicals can have short- and long-term effects on human health when people are exposed to them. Even small amounts have been seen to affect “reproductive, behavioral, metabolic impacts and chronic diseases such as cancer, asthma, and diabetes,” they noted. “Toxic exposures are also linked to learning disabilities such as low IQ, autism spectrum, and attention-deficit/hyperactivity disorder (ADHD).”

Calling on legislators to act — and consumers to keep a watchful eye and put pressure on lawmakers — Environmental Defence’s Cassie Barker said in the report, “There is a lack of regulations for internal lead in products, despite the tendency for these products to fall apart and expose their dangerous hidden components. This gap in regulation is a loophole that dollar stores are using to sell products that contain high levels of lead — and not break any laws.”

Take Our Poll: How Do You Typically Split the Restaurant Bill?
More: How Much Does a Person on Social Security Make?

Barker added, “In addition to retailer accountability, the government must also protect consumers from these toxic exposures. Our toxic laws need to be amended to protect consumers, particularly children, and products must be tested and removed from commerce when they pose a risk to our health.”