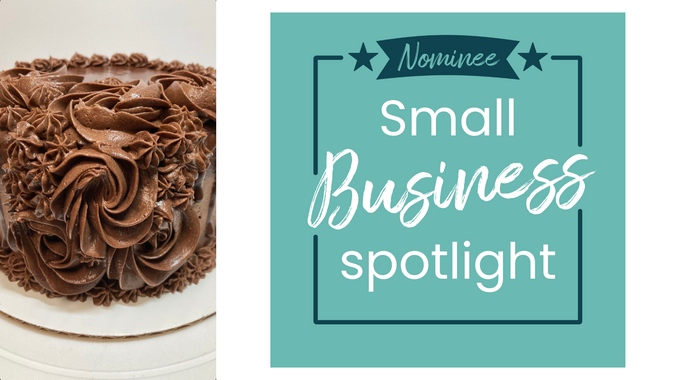 “Small Business Spotlight” nominee Bradley Bake Shop specializes in gluten-free, sugar-free, vegan and keto treats, from gluten-free sea salt brownies to keto-friendly carrot cake. Owner Eleanor Bradley opened her shop in Bogota, New Jersey, in 2016 after the cookies she baked for her gluten-free husband turned out to be a hit with the locals. Here, she shares the story of her transition from teacher to entrepreneur and how to determine if your business idea is truly business-ready or better off being kept as a hobby.

Here It Is: Our 2022 Small Business Spotlight
See: 7 Things You Should Never Do When Planning for Retirement

Was there a particular moment or experience that inspired you to start your business?

I was working as an English teacher in Hackensack, [New Jersey], and we had summers off, so it was towards the end of the year and I spent the bulk of my free time baking. I would experiment with a lot of gluten-free stuff. I became better at it. And my daughter would sample my stuff. At the time she was in her early 20s, and she said, “Oh mom, these are delicious! You could sell these!” So I signed up for a local farmers’ market in Bergen County, and people, to my surprise, were actually buying our cookies. I said, “Wow, I could actually make a living doing this.”

This was in 2015, and I was close to retirement anyway, so my husband and I opened a store in 2016. I worked full-time as a teacher and I would literally run to the shop and open up in the afternoon. That’s how we got started. It was crazy because people would pass by and they would figure that since we were closed during the day that we were closed, period. It was really hard to generate business part-time, so I said, I have to do something — either retire and work the business or stay at the school and lose the business. It was scary, but I made a decision that I would quit my job and do this full-time. And I’ve been doing it ever since.

What did you take from your past experiences as a teacher that’s helped you as a business owner?

You learn your market, learn your customer — what are they asking for? They’re asking for bread, they’re asking for cakes. People started asking for birthday cakes, which I did not make — I was a teacher and a novice baker. All I made were cookies — that was it. So when they came to me and said, “I need a gluten-free birthday cake, do you make cake?” I would lie and say, “Yes, I make cakes!” And I would literally make the cakes maybe three times before I got it right. And that’s how I learned to make cakes. So after trial and error, throwing a lot of stuff away in the garbage, I’d get the cakes just right and I would move on to a different kind of cake. OK I made a vanilla cake, now I’m going to try a chocolate cake. It was always trial and error.

I always cooked. Cooking was something I enjoyed, something that relaxed me. So I would go into my kitchen and cook, but I had never really baked. By the grace of God, he just kind of blessed me with this and I just started making all kinds of things. You name it, I can make it, and I can make it gluten-free or I can make it with regular flour. It was a journey — put it that way!

What has been the most rewarding aspect of being a business owner?

So the most rewarding aspect is being my own boss, calling my own shots, and watching the business grow from literally nothing to the point where people come in. Just last week a couple of people came in telling us that they were recommended by friends or family members. Or, “I see on Google you got five stars.” That makes me feel good, because I put everything into what I do, and it’s nice when people acknowledge that and are willing to take the time to write a review that says why they like it.

How has inflation affected your business, if at all, and how have you been coping with it?

Stores that I traditionally went to for my products, I had to say bye to. Case in point, I went to one big-box store last week and their eggs were $2.09. I was like, wow that’s pretty good! I went Monday this week, and those same eggs were $3.59. It’s insane. When you’re running a business, you rely on your ingredients to be affordable, and when they jump 40-plus percent, that’s crazy. I had to find stores that would sell the same things for a lot less money than the stores that I traditionally go to. We use a lot of organic products. So instead of using exclusively organic sugar, which is what I was doing, I have to find a fine-quality sugar that is not organic but is non-GMO. You want quality. Quality doesn’t necessarily translate into organic, or vice versa. I had to look at alternatives to pricey organic items. If I can, I defer to organic, but I try to find affordable prices for the same items I was using in the recent past.

It’s a challenge. Fortunately, I’ve been able to keep my prices where they are and I plan to continue to do that. I’d rather hunt for less expensive ingredients than charge my customers more because nobody wants to feel the pinch in that way. If they can’t get what they want at affordable prices, they’re going to buy less. That’s the bottom line.

Pray about it. Make sure that it’s something that you want to do. And have stamina. People think, “I want to open a business.” That’s all well and good, but you have to have all your ducks in a row. You need to have a business plan. Do you know where you’re going and how you’re going to get there? People think if they have a gift, they have a talent, “Oh I’m just going to open up this store.” But you have to look at so many things.

Before you even plan on opening a business, do your due diligence. Don’t just jump at the first storefront that’s available that you find affordable. Make sure the traffic in that area is what you need in order to grow your business. You need to know where you’re selling, where your market is, where is going to be most profitable for you.

Then what I would do before I opened up a store is actually what I did do. I sold at farmers’ markets so I could see whether or not people would be interested in buying my product. When I saw I could actually make money from the product after selling for almost a year, I said, OK this is viable, we can do this. I can do this full-time, and chances are we can make money. So see if you have an audience, if you have a market for what you’re selling — then you know you have a business. If not, it’s a hobby.

This interview has been edited and condensed for clarity.