Small Businesses That Were Boosted by a Famous Visit 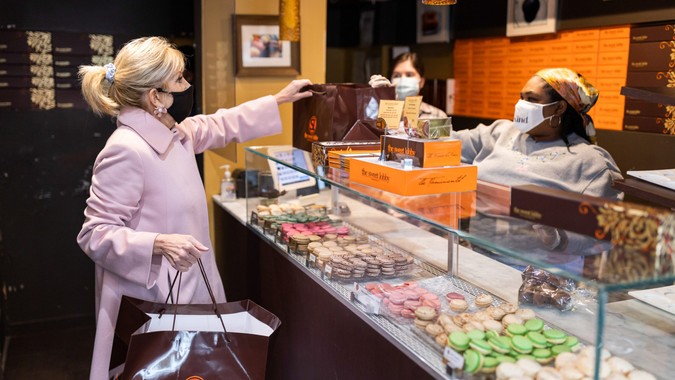 It can be hard for a small business to gain recognition outside of its own neighborhood, but sometimes, if the right customer pops in, it can lead to a surge of publicity and a huge boost in interest — and even sales. This recently happened when First Lady Jill Biden paid a visit to a Washington, D.C., pastry shop. According to Washington’s ABC7, Biden went to The Sweet Lobby in the Capitol Hill neighborhood shortly before Valentine’s Day and purchased one of everything in the shop. Since word got out of her visit, business has spiked.

“Just really showing actual support for small businesses […] at a time like this is so valuable,” owner Winnette McIntosh Ambrose told the news channel.

And Biden isn’t the only famous face to help boost business at a local favorite.

Biden is not the only White House resident to be a food influencer. Former President Barack Obama helped boost sales at a number of the restaurants he famously visited, including Spiaggia in Chicago and Restaurant Nora in Washington, D.C.

Obama was a regular at Spiaggia before relocating to D.C. and even had his celebratory dinner there when he was elected president. Tony Mantuano, Spiaggia’s chef and partner, told WNYC that his upscale Italian restaurant “absolutely” saw an increase in the number of customers as the word got out the Obamas were frequent diners.

Stephen Colbert wanted to help bring some attention to a deserving small business by buying them a Super Bowl ad this year, and, with the help of his research team, he chose Foggy Pine Books located in the Appalachian town of Boone, North Carolina.

“These big companies aren’t the ones who need our support the most right now. It’s small businesses out there who have been hurt the most in this pandemic,” he told Today.

Find Out: What COVID-19 Has Meant for Small Businesses

The ad that aired included a glowing endorsement from Tom Hanks, who shared some of the books he picked up at the store.

Since the Super Bowl, the bookstore has been “just absolutely slammed” with orders, owner Mary Ruthless told Today. And as of March 16, the store was still seeing a huge spike in demand.

“#ThankYou so much for all your support, kind words, & orders,” the bookstore’s official account tweeted at the time. “We’re working as quickly as possible but are still quite backed up. If you want to check the status of an order or you need it by a specific date, call us at 828-386-1219 & our #booksellers will be happy to help!”

Check Out: Steps Small Businesses Can Take To Bounce Back in 2021

Oprah named Telfar’s shopping bag one of her Favorite Things for 2020, but she isn’t the only celebrity who has propelled the Queens, New York-based bag brand into bestseller status. Designer Telfer Clemens launched his bags in 2014, but it wasn’t until 2017 when he won the top prize of $400,000 at the CFDA/Vogue Fashion Fund Awards that his shopping bag — dubbed the “Bushwick Birkin” — really rose in popularity, The Cut reported. It’s since been worn by the likes of Solange Knowles and Selena Gomez.

Now, Telfar can’t seem to keep the bags in stock.