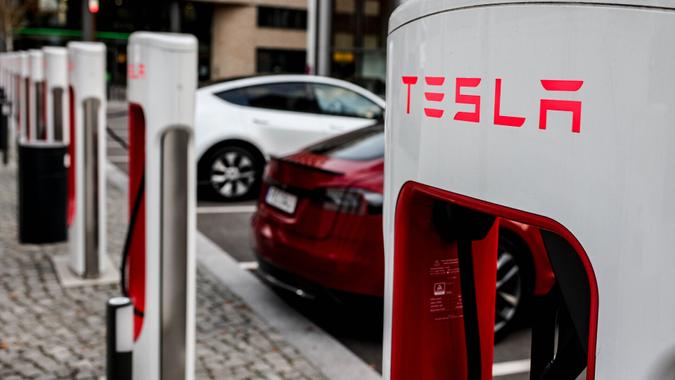 While Elon Musk made headlines this week for his successful bid to buy Twitter, news about rising competition for his Tesla electric vehicle company flew largely under the radar.

Discover: 22 Side Gigs That Can Make You Richer Than a Full-Time Job
More: Rising Gas Prices: The True Cost of Going Electric

Tesla still dominates the EV market, accounting for about 75% of EVs sold during the 2022 first quarter, according to the latest data from Kelley Blue Book (KBB). That’s up from a 70% share the previous year. Tesla’s Model Y SUV and Model 3 sedan made up 68% of the market all by themselves.

Tesla’s main advantage is that its vehicles got a years-long head start on the rest of the field under the stewardship of Musk, the company’s founder and CEO.  But as more automakers launch their own electric vehicles, Tesla “is in for a tougher fight than it has seen before,” KBB said.

One notable rival is the Hyundai Ioniq 5, which was recently named the 2022 World Car of the Year. The starting price of the Ioniq 5 is $44,000, well below the $64,990 starting price for the Tesla Model Y. Hyundai vehicles also are still eligible for the full federal $7,500 electric-vehicle tax rebate no longer offered on Tesla products.

See: POLL: Do You Think States Should Suspend Their Gas Taxes?
Find: Elon Musk In Line To Get a $55.8 Billion Bonus as Tesla Posts Record Profits

A list of the top 10 selling EVs during the first quarter follows.