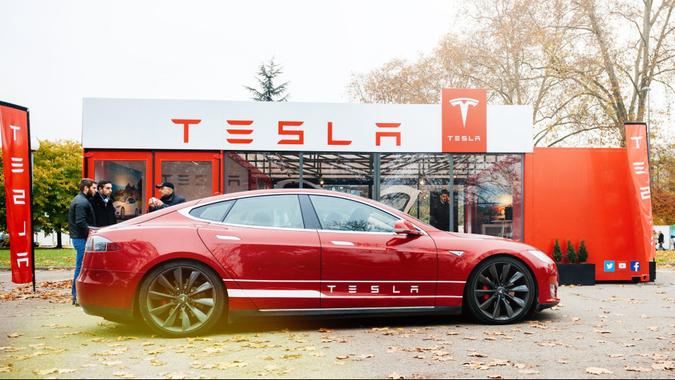 Tesla finally opened its Gigafactory Berlin on March 22, after months of delay, in a move that some analysts say will remove “a major overhang on the stock over the past few months.”

“Excited to hand over the first production cars made by Giga Berlin-Brandenburg tomorrow!,” CEO Elon Musk tweeted on March 21.

Tesla stock, which is down 23% year-to-date, was up 1% in pre-market trading.

Wedbush Securities analyst Dan Ives said in a note sent to GOBankingRates that he views the opening of Giga Berlin as one of the biggest strategic endeavors for Tesla over the last decade “and should further vault its market share within Europe over the coming years as more consumers aggressively head down the EV path.”

German authorities gave approval on March 4 for Tesla to officially begin production at its Gigafactory Berlin-Brandenburg, as GOBankingRates previously reported.

The red tape and headaches seen around the delays/disputes opening up this flagship European factory have been frustrating for investors to watch unfold and left many on the Street doubting whether Giga Berlin would ever open, Ives wrote.

“The Berlin factory establishes a major beachhead for Tesla in Europe with potential to expand this factory to production of ~500k vehicles annually with Model Y front and center over the coming 12 to 18 months. With the race for electrification in Europe hitting another gear and competition for EVs increasing from every angle with VW among others doubling down on its EV ambitions, we view Giga Berlin as a major competitive advantage for Tesla to further build out its supply footprint in this key region,” he said.

Ives added that overall supply remains very tight for Tesla, however as the EV company has “a high-class problem of demand outstripping supply with this issue now translating into approximately 5- to 6-month delays for Model Ys and some Model 3s in different parts of the globe as of early March.”

The key to alleviating these issues is centered around the key Giga openings in Austin and Berlin, which will help solve the bottlenecks of production for Tesla globally, he said.

“The chip shortage remains a moderating issue for Tesla and the global auto industry into the rest of 2022, although clearly the volatile and heartbreaking invasion in Ukraine and its impact on broader Europe remains an issue the Street will closely watch in the coming weeks/months,” Ives wrote.

Wedbush maintained its Outperform opinion on the stock with a $1,400 price target.