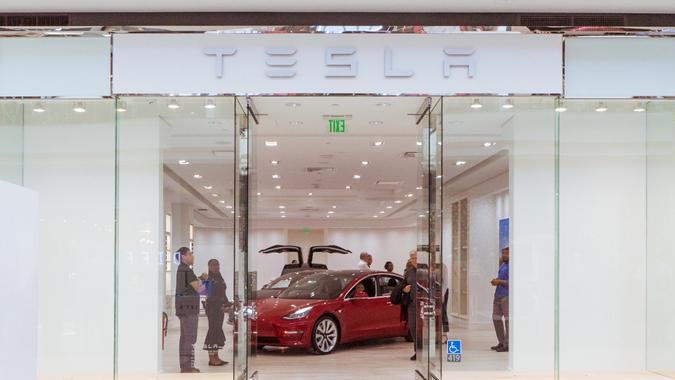 To say that Elon Musk is a risk-taker would be a bit of an understatement — after all, you’re talking about a guy whose side hustle is space travel. He’s known for betting big, and not always to preferable outcomes. On Feb. 21, he was the richest person in the world. On Feb. 22, he lost $15 billion in a single day after a wild gamble on Bitcoin sent Tesla shares cratering by 25%.

One of his most audacious gambles, however, played out not on the highway or in the cosmos, but on paper. On June 12, 2014, Musk announced he was turning over Tesla’s hard-fought and high-profile patents to the general public. It was a stunning move for a company built on cutting-edge technology, innovative ideas and game-changing inventions. Technology, ideas and inventions, after all, are exactly what patents are designed to protect.

At First, Tesla Pursued Patents Just Like Everybody Else

In 2006, the Department of Energy loaned a California startup called Tesla $465 million to open a brand new kind of auto plant. Its dynamic young leader, Elon Musk, promised to build fully electric luxury cars that could travel more than 200 miles on a single charge. The previously unthinkable idea was made possible by exciting new technology developed by Tesla, including its groundbreaking lithium-ion batteries.

Find Out: What Kind of Taxes Do Top Company Execs Pay? From Tesla, Amazon, Walmart — and Beyond

Tesla piled up patents. Without them, Musk feared the big, powerful auto manufacturers would steal Tesla’s tech, flood the market with their own EVs and use their clout and cash to muscle Musk out of the fully electric future that he envisioned.

But Then Musk Had a Change of Heart

Nearly a decade later in 2014, Musk expressed a philosophical shift in a now-famous blog post with a headline apparently written by Borat titled “All Our Patent Are Belong to You.” After all those years, the big automakers were still only releasing a trickle of underwhelming EVs. Gas, oil and global warming ruled the day and Musk now found himself longing for the flood of affordable, capable EVs he once feared.

Economy Explained: How Does Cryptocurrency Work — and Is It Safe?

The dream of a zero-emissions future was far too lofty for Tesla to accomplish on its own, but the big automakers were still mostly on the sidelines. Musk announced that Tesla would not “initiate patent lawsuits against anyone who, in good faith, wants to use our technology.” The statement remains the core of Tesla’s “Patent Pledge.”

The Results Were Nearly Immediate

Shortly after Tesla’s announcement, Toyota followed suit and opened up 5,600 patents of its own, most of which were also related to alternative fuel like hydrogen cells. Ford wasn’t far behind. It opened many of its own patents, also related to EVs, to anyone willing to pay for a license. Within a year, several companies were already using Tesla’s newly liberated patents.

Did You Know: How Rich Are These Top CEOs?

So what does it mean for you and anyone else who isn’t in the market for open-sourced patents dealing with lithium-ion and hydrogen? Mostly, Musk did the Earth and himself a favor by speeding up the inevitable march to a fully electric future. When Musk opened his patents in 2014, fewer than 500,000 EVs were sold. Just five years later in 2019, that number had soared to more than 2 million.

Learn More: 6 Reasons Tesla Might Be the Stock You Need To Buy

In 2019, Musk doubled down on his open-patent policy and his dream of an industrywide collaboration toward a carbon-neutral future with this tweet: “Our true competition is not the small trickle of non-Tesla electric cars being produced, but rather the enormous flood of gasoline cars pouring out of the world’s factories every day.”