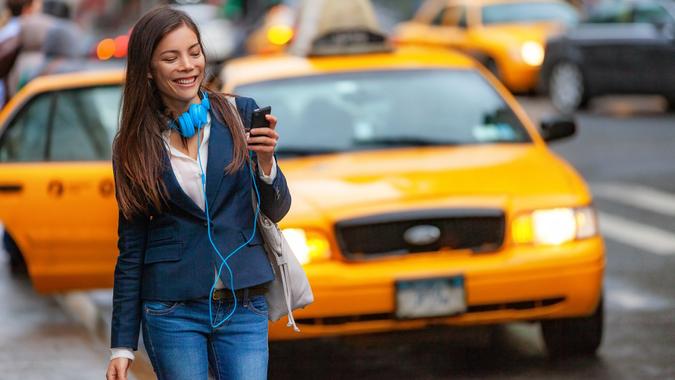 New Yorkers will soon be able to take a yellow cab using the Uber app, thanks to a business partnership announced March 24 between Uber and taxi technology system provider Creative Mobile Technologies (CMT).

DoorDash vs. Uber Eats: Which Earns More Cash?
Discover: How Much Do Uber Drivers Make? Is It Worth Your Time?

“This is a real win for drivers — no longer do they have to worry about finding a fare during off peak times or getting a street hail back to Manhattan when in the outerboroughs,” Guy Peterson, Director of Business Development for Uber, said in a press release. “And this is a real win for riders who will now have access to thousands of yellow taxis in the Uber app.”

The Uber-CMT deal will start in beta this spring and roll out to the general public this summer, according to the release.

Anyone with the Uber app will have access to thousands of yellow taxis that operate on the CMT/ARRO platform. As for taxi drivers, they will see Uber-originated fares on their driver monitors which they already use to service e-hails from the ARRO taxi app.

“New York City is back!,” Ron Sherman, Chairman of Creative Mobile Technologies and a pioneer in the taxi industry, said in the release. “As businesses bring their employees back, as tourists flock to New York City again and as New Yorkers start going out and replenishing our local economy after a devastating pandemic, yellow taxis and Uber are bringing the best our industries have to offer to help this city get back on its feet.”

The Wall Street Journal reported that Uber and its taxi partners will receive a cut of the fare, but the companies declined to specify the terms. Uber’s average global take rate for rides in the fourth quarter was 20%.

Angelo Zino, CFRA senior industry analyst, wrote in a note sent to GOBankingRates that while this is not a first for Uber — there have been similar partnerships across the globe — “we believe this is the biggest such deal in one of Uber’s largest markets (top 3 in the U.S.).”

“We believe the deal offers additional driver supply in a challenging market, with a recent spike in gas prices creating a headwind in trying to find and keep drivers active. Ultimately, we see more partnerships like this getting announced, which will further sustain Uber’s dominant share position in the ridesharing space and increases the potential installed base of drivers,” Zino wrote in the note.

See: Are You Spending More Than the Average American on 25 Everyday Items?
Crypto Regulation: Proof-of-Work Bitcoin Mining Could Be Banned in New York Due to Climate Concerns

“Even as driverless vehicles become a reality, it will take time and Uber’s human installed base will still be critical in regions like NYC where AVs could take longer,” he wrote.

CFRA maintained its “Strong Buy” opinion on the stock.