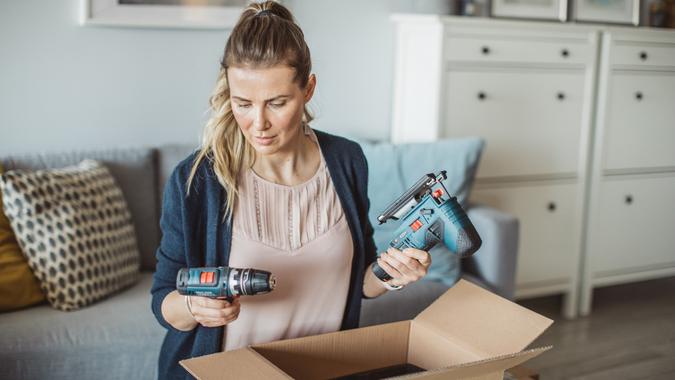 See: The 37 Mistakes We Make When Shopping at Costco, Amazon, Target and Walmart
Find Out: Walmart Goes on 150K Employee Hiring Spree — Could Perks to Working There Benefit You?

In a Wednesday press release, Home Depot said the two retailers will work together to expand Home Depot’s same-day and next-day delivery services with Walmart GoLocal, which launched in August. The service will be available in select markets in the coming weeks, with plans to expand to multiple markets across the United States by the end of the year.

CNBC, citing spokespeople from the two companies, said Walmart will begin the deliveries at select stores in New Mexico in the next few weeks before expanding to other markets. Terms were not disclosed. However, products that qualify for Walmart GoLocal deliveries include tools, fasteners, paint and other supplies that easily fit in a car. The delivery option will be available when online customers check out.

“This partnership brings us even closer to our goal of offering same-day or next-day delivery to 90% of the U.S. population,” Stephanie Smith, Home Depot’s senior vice president of supply chain, said in a statement.

Home Depot is the first retail client to sign up for GoLocal, CNBC reported. Walmart’s long-term plan with the service is to build another revenue stream beyond retail by signing on customers ranging from local stores to national chains. Deliveries are made by independent workers who use Walmart’s delivery platform Spark Driver.

Because Walmart is so ubiquitous in the U.S., it should have an edge over other third-party delivery services. As CNBC noted, the big-box retailer boasts more than 4,700 stores across the country, and roughly 90% of Americans live within 10 miles of a Walmart store.

The benefit to Home Depot is that it can bring more speed and efficiency to online delivery orders — something the home improvement retailer clearly values as it grows it digital business. Sales on its digital platforms rose 86% year-over-year during fiscal 2020, the company said, with more than half of online orders fulfilled through stores.

Meanwhile, some retail observers have speculated about a possible Walmart-Home Depot merger. Although this has not been broached publicly by either company, a Bloomberg column republished on Monday by the Washington Post said such a merger “makes sense” — partly because it would help both retailers gain more scale to overcome supply chain headaches.

Bloomberg cited comments from Brittain Ladd, an analyst with supply-chain solutions company Kuecker Pulse Integration and longtime consultant to the retail industry. “Supply chains have always had an element of risk to them because supply chains in most cases are truly global,” Ladd told Bloomberg. “But what we’re also seeing today are supply chains that are in many ways too lean and paying for it. This is one of the best reasons for very large retailers and other companies to say, ‘We need to start thinking big in our M&A and use it to reimagine our supply chains.'”

Discover: GDP Inches Upward to 6.7% Fueled by High Demand — Can Supply Shortages Be Remedied in Time?
Explore: Target Will Hire 30,000 Supply Chain Professionals — Here’s How Company Perks Could Benefit You

Such a deal would also help Walmart freshen up its brand and bring in more non-grocery revenue, he added.