When it comes to women in leadership roles, there might not be another woman as focused and determined in the world of banking as Diane Morais. As the president of consumer and commercial products at Ally Bank, Morais has more than earned her spot in what she calls a “traditionally male-dominated industry.” GOBankingRates’ Women in Finance series will highlight women, like Morais, who have become pioneers in their fields.

For more than ten years, Morais has given women visibility in the corporate world with her effective and thoughtful leadership. When she began her career in banking, she quickly rose to an executive level. But as she climbed the ladder, she noticed the lack of diversity in her network.

Women Working It: Moms Who Made a Fortune in Business

“I did have one role at a different company where my entire peer group was male, and it was really the first time that I’d ever kind of consciously thought about it,” Morais said to GOBankingRates.

The lack of women in leadership is all too common, however. Even with the number of women sitting on boards of Fortune 500 companies increasing from 9.6 percent in 1995 to 22.2 percent in 2017, men still overwhelmingly dominate the number of seats on corporate boards today, according to data from the Pew Research Center. That gap is even wider for women pursuing financial leadership roles; women only account for 15 percent of executive roles in finance.

Although the number of women in powerful seats might be far and few between in finance, this hasn’t discouraged Morais. Rather, it has forced her to be resourceful and creative with her leadership.

Where to Job Hunt: Highest-Paying Jobs for Women

“It was a good learning experience because it taught me that there were certain places that I might not have been where conversations about work were happening, so I had to figure out how to influence some of those decisions without necessarily always being present,” Morais said to GOBankingRates.

Experiences like these have capitulated Morais to one of the biggest success stories in banking today.

Watch the full video to see how Morais continues to thrive in the elite finance world.

Click through to read more about female founders who are leading their companies to new heights. 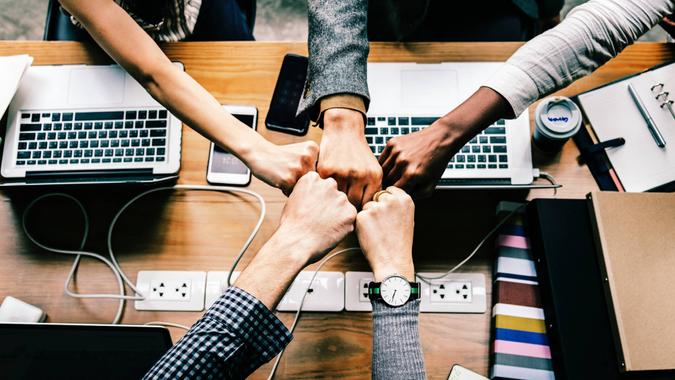 15 Genius Companies from the Minds of Iconic Tech Giants

These startup employees couldn't help but start their own.