Singing. Dancing. Acting. Is there anything Lady Gaga can’t do? Now she’ll also be known as an Oscar winner for co-writing the song “Shallow,” which won in the best original song category at the Academy Awards on Feb. 24. Lady Gaga joined her “A Star Is Born” co-star Bradley Cooper on stage for an emotional performance of the song during the Oscar ceremony.

Even though she didn’t win in the best actress category, Gaga still has a “Million Reasons” to celebrate like a star — most of which come with dollar signs. Here’s a look at Lady Gaga’s net worth from the start of her career to today.

In 2007, up-and-coming artist Lady Gaga — Stefani Joanne Angelina Germanotta — scored a songwriting gig for an Interscope Records imprint. The same year, the rising star lent her powerhouse vocals to New Kids on the Block for the boy band’s comeback album. Although Def Jam Records dropped Gaga during this time, she was soon snapped up by R&B singer Akon for his Kon Live Distribution label.

Her debut album, “The Fame,” propelled the singer to major pop star status. “The Fame” was only the first of many successful ventures for Gaga. Today, Lady Gaga’s net worth is $300 million, according to Celebrity Net Worth. Publicity from “A Star Is Born” might have helped with the increase from $275 million. The international superstar earned $50 million in just the first half of 2018, Forbes reported.

Fans have been treated to five solo Lady Gaga albums with a sixth reportedly in the works. Her three most popular albums as of Februrary 2017, according to Nielsen, include:

She paired up with Tony Bennett in 2014 for the jazz album “Cheek to Cheek,” which half a million copies, according to the Recording Industry Association of America. In 2015, two Lady Gaga songs — “Just Dance” and “Poker Face” — passed the 7 million download mark, making her the only artist to have two songs reach this level, according to Billboard. Her other top hits include:

Her latest solo album, “Joanne,” was released in October 2016 and debuted at No. 1 on the Billboard 200 chart. The album has sold more than 1 million copies, according to the RIAA.

Gaga saw a 1,000 percent surge in music sales after her performance at the 2017 Super Bowl halftime show, according to Nielsen Music. The singer sold around 150,000 digital songs and albums that day alone.

Fans are eagerly awaiting a Lady Gaga new album. During her 2017 “Joanne World Tour,” the singer announced that she was working on new music.

Learn: How Much It Costs to Have a Wardrobe Like Lady Gaga

Lady Gaga’s fans — nicknamed “Little Monsters” — can’t get enough of her music, so it’s no surprise the artist’s tours are a major contributor to her net worth.

In early 2017, Lady Gaga’s “Joanne World Tour” kicked off at the Coachella Valley Music and Arts Festival in Indio, California. The singer — who likely earned between $3 and $4 million for her back-to-back weekend performances, according to Billboard — filled the headlining spot after Beyoncé dropped out following her February 2017 pregnancy announcement.

In February 2018, due to severe pain brought on by her ongoing battle with fibromyalgia, Lady Gaga canceled the final 10 dates of her “Joanne World Tour.”

Will Lady Gaga Be in the EGOT Club? These 12 Stars Have One Thing in Common

Lady Gaga has found success on the small screen as well as the stage. In 2015, Gaga joined the cast of “American Horror Story: Hotel” and showcased some serious acting chops playing The Countess and mysterious owner of Hotel Cortez. The star’s “American Horror Story” performance received rave reviews and helped revive her image after the much-criticized “Artpop” fail.

Reviews for a “A Star Is Born” praised the star for her on-screen performance, in particular her debut in the movie when she unleashes her tectonic vocals to an unknowing audience.

View this post on Instagram
What a dream come true to be in London for the premiere of my first film. I’m so proud to be here with my incredible director and co-star. #AStarIsBorn ????: Mike Marsland/WireImage
A post shared by Lady Gaga (@ladygaga) on Sep 27, 2018 at 5:52pm PDT

Aside from her Feb. 24 Oscar win in the best original song category, Lady Gaga’s music and her acting skills have earned her numerous other awards. Among many other honors, her music has won her nine Grammys.

Lady Gaga’s performance in “American Horror Story: Hotel” earned her the 2016 Golden Globe Award for the “Best Performance by an Actress in a Limited Series or a Motion Picture Made for Television” category.

Lady Gaga has partnered with a host of companies in a range of industries to generate name recognition and boost her ever-growing fortune.

From 2010 to 2014, Gaga was the creative director for a specialty line of Polaroid imaging products. In 2010 and 2011, she served as a spokesperson for MAC’s Viva Glam campaign, which raises money for the MAC AIDS fund. In 2014, the singer was the face of the Versace Spring/Summer campaign, and she also starred in the Japanese cosmetic company Shiseido’s 2015 “Be Yourself” campaign.

After opening a temporary workshop at Barneys New York during the 2011 holiday season, Lady Gaga was featured in the store’s Spring 2016 campaign. The pop star also has two of her own fragrances, making her one of the exclusive celebrity entrepreneurs. Fame debuted in 2012 and sold six million bottles its first week and 30 million in less than a year. The second, Eau de Gaga, hit shelves in 2014.

In 2016, the singer’s startup, Backplane — a social media platform for her fans — went bankrupt. Gaga had partnered with Google in 2011 on the venture, which was initially valued at $40 million. The singer seems to have rebounded in 2018 with her newest venture, Haus Beauty, a secretive beauty and aesthetic company that already has backing from Silicon Valley, according to Recode.

Lady Gaga and 20 Other: Celebrities Who Run Foundations or Charities

Lady Gaga’s Academy Award win in February followed her split from CAA talent agent Christian Carino, according to Us Weekly. The publication had broken the news of the couple’s engagement in November 2017.

The singer was previously engaged to actor Taylor Kinney. He proposed to her on Valentine’s Day 2015 with a heart-shaped platinum ring — thought to be about 8 carats — worth an estimated $500,000. After having dated since 2011, when he starred in Lady Gaga’s video for her song “You and I,” she announced their split in a July 2016 Instagram post.

Creating chart-topping hits has given the star an affinity for the good life. Impressive for anyone, but especially considering Lady Gaga’s age, she bought a 10,270-square-foot Malibu, California mansion for $23.5 million. In 2016, she reportedly bought the $5.25 million Hollywood Hills, Calif., home of musician Frank Zappa, according to Variety.

Not surprisingly, the trend-setting Gaga has a soft spot for fashion. In 2012, she paid more than $130,000 for an Alexander McQueen gown at an auction from the personal collection of Daphne Guinness.

More on Celebrities and Money 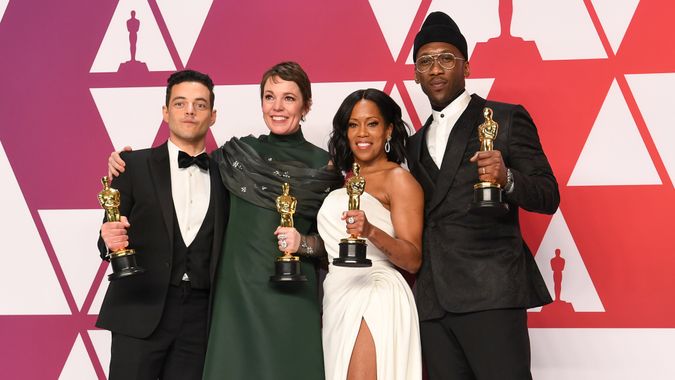