$15 Minimum Wage Coming in 2022 to These States — When Will They Go Into Effect? 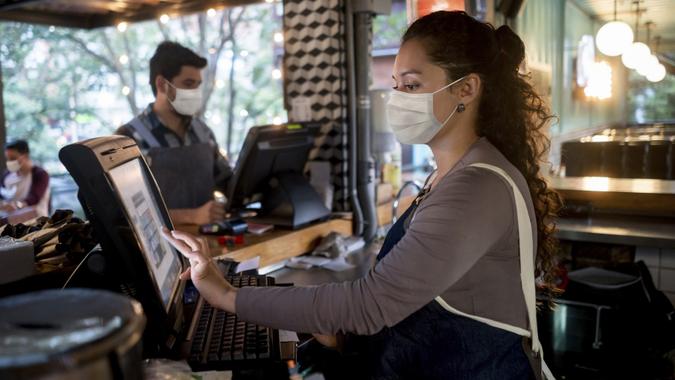 As 2021 wraps up, a total of 26 states have announced raises in minimum wage in 2022, with 22 of those states implementing the increases on January 1.

See: Here’s What the US Minimum Wage Was the Year You Were Born
The Year in Review: How the Minimum Wage Changed Throughout the US in 2021

The highest state rate is in California, at $15 per hour, and parts of New York, including New York City, Nassau, Suffolk and Westchester counties, which also have a $15 minimum wage. Following close behind are the Portland Metro Area in Oregon at $14.75 effective July 1, 2022, and Washington state at $14.49 effective January 1, 2022. The District of Columbia’s minimum wage is $15.20, according to a report by payroll experts at Wolters Kluwer Legal & Regulatory U.S.

“These minimum wage increases indicate moves toward ensuring a living wage for people across the country,” Deirdre Kennedy, senior payroll analyst at Wolters Kluwer Legal & Regulatory U.S., said in a statement. “In addition to previously approved incremental increases, the change in presidential administration earlier this year and the ongoing coronavirus pandemic have also contributed to these changes.”

Ten more states have scheduled incremental increases that will bring their minimum wages to $15 per hour within the next few years, including Connecticut and Massachusetts by 2023; New Jersey by 2024; Delaware, Illinois, Maryland (large employers), and Rhode Island by 2025; and Florida and Maryland (small employers) by 2026. Pennsylvania will also reach $15 per hour for employees under the Governor’s jurisdiction by 2024, according to the report.

“Workers in 25 States and 56 localities are getting a raise in 2022 – and that’s thanks to our movement for dignity and respect on the job. Hundreds of strikes of thousands of workers demanded better, and now tens of thousands will see higher wages in the new year,” the Fight for $15 organization tweeted Dec. 28.

Fight for $15 has had a significant impact on wages, and has influenced policy debates and the public conversation about fair pay and workplace rights, according to the National Employment Law Project (NELP). “In the first nine years since its founding, the Fight for $15 has resulted in $150 billion in higher pay for 26 million workers,” according to a NELP report.

“Now, $15 is widely understood to be the bare minimum workers anywhere need to get by. $15 has always been the floor, not the ceiling, for wages — and working people will continue to demand lawmakers and employers increase pay to keep up with the rising cost of living and ensure that every community can thrive,” Allynn Umel, campaign director for Fight for $15, told CNBC.

In addition, in November, the Department of Labor announced a final rule that implements President Biden’s executive order to increase the hourly minimum wage to $15 for employees on federal contracts beginning Jan. 30, 2022.

“The workers helped by Executive Order 14026 and today’s final rule do essential work on our nation’s behalf,” U.S. Secretary of Labor Marty Walsh said in a statement in November. “They build and repair the federal infrastructure, clean and maintain our national parks, monuments and other federal facilities, care for our veterans, and ensure federal workers and military service members are provided with safe and nutritious food. Implementing this Executive Order improves the economic security of these workers and their families, many of whom are women and people of color.”

The Wolters Kluwer report noted that while some states and localities have far exceeded the federal minimum wage, others remain on the lower end of the spectrum, with some state minimums coming in below the federal wage rate, and others with a slower incremental increase.

“In response to this and to a competitive job market, some organizations operating in multiple states have taken to setting their own minimum wages. Companies such as Costco, Chipotle, Wells Fargo, Aetna, and Walmart have implemented minimum wage rates for their employees, some of which exceed the highest state rate,” according to the report.

Explore: 14 Countries That Have a Higher Minimum Wage Than the US
Compare: The Best & Worst Cities for Living Off the Proposed $15 Minimum Wage

Costco, for instance, recently increased the minimum wage for its U.S. workers from $16 to $17 per hour, the report noted.