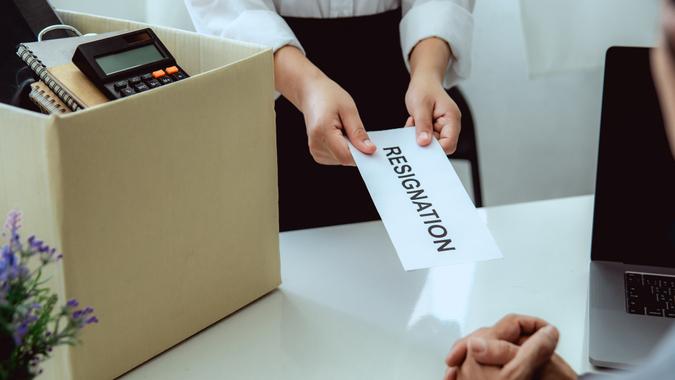 In a sign that The Great Resignation is still far from over, the number of Americans who quit their jobs in November hit a record high, with 4.5 million people leaving their jobs. This follows October’s 4.2 million quits, according to the Labor Department’s Job Openings and Labor Turnover Survey (JOLTS) report that came out on Jan. 4.

See: Thinking About Quitting? Retirement Mistakes to Avoid During the Great Resignation
Find: Before You Rage Quit, Consider These Financial Ramifications

In addition, the quits rate increased to 3%, matching the series high in September, according to the Labor Department.

Ronni Zehavi, CEO of HR platform HiBob, told GOBankingRates that while quit rates and job openings were down slightly, it does not mean that the Great Resignation has concluded or that the talent shortage has been resolved.

“What it can show is that we are heading toward the ‘Great Return’ as workers look for new opportunities. Of Americans who quit, the reason is clear: they want more flexibility,” Zehavi said. Indeed, a survey of hiring managers and HR leaders from HiBob and Fiverr showed that this is the reason 30% of people left their jobs, as GOBankingRates previously reported.

And to prepare for the “Great Return,” Zehavi said that companies must create a workplace experience that employees want to be part of, which can be done by offering a people-first culture built on recognition and transparency, finding ways to bring people together despite remote work and physical distance, and giving team members autonomy over when and how they work.

“All of this can be accomplished through technology and strong leadership principles, and will be essential to attracting new candidates and retaining strong talent,” he said.

Ashley Paterson, CEO AT Healthy Hippo Holdings, echoed the sentiment, telling GOBankingRates that “it has not been easy to find talent.”

“However, with every position we have filled in the last few months — we always incentivize them with some sort of bonus or a slightly higher wage/salary than asking. We realize the struggle of finding good candidates and when we find them, we want to do our best to keep them,” Paterson added.

Quits increased in several industries with the largest upticks in accommodation and food services, health care and social assistance, and transportation, warehousing, and utilities, according to the report.

The number of quits increased in the Northeast, South and Midwest regions.

In addition, the number of job openings decreased slightly to 10.6 million on the last business day of November, from 11 million in October, reflecting the still-tight labor market.

The largest quit rates were in accommodation and food services, with 6.9%; leisure and hospitality, with 6.4%; and retail trade, with 4.4%, according to Labor Department data.

See: 1-Page Resumes, Wearing Suits to Interviews & More Outdated Job Search Advice You Shouldn’t Follow
Find: Applying for a Job? Even a White Lie on Your Resume Could Cost You the Position

Openings were the largest in the accommodation and food services industry, with 8.9%; leisure and hospitality, with 8.7%; and educational services, and transportation, warehousing, and utilities, with both 8.2%, according to the Labor Department. The number of job openings increased the most in the South and Midwest regions.