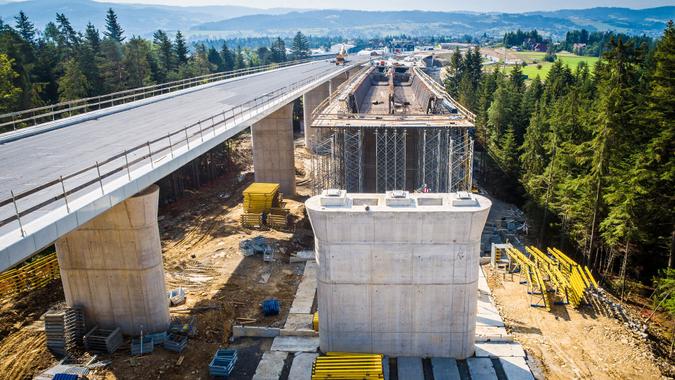 The Senate’s $1.2 trillion infrastructure package has a little something for everyone, from outlays for broadband and electric vehicles to investments in equal opportunity, racial equity and environmental justice.

See: Infrastructure Stocks Get a Boost After Bill Passage – Are They Worth the Investment?
Learn: Infrastructure Bill’s Crypto Concerns Are Heading to the House of Representatives

The bipartisan Infrastructure Investment and Jobs Act passed in the Senate on Tuesday by a 69-30 vote, marking a major win for President Joe Biden. The bill will now go to the House of Representatives for final approval. Nineteen Republicans voted in favor of the bill, along with 50 Democrats.

Here are five things in the bill that could have a lasting impact on American lives:

1. Funding for roads and bridges

This might seem like an obvious choice, but in a nation that loves cars as much as the United States, improving roads is clearly important to tens of millions of Americans. The $110 billion set aside for roads, bridges and major infrastructure projects is less than the $159 billion Biden initially requested in the American Jobs Plan, CNN reported. However, the money should still go a long way toward improving driving conditions in the U.S. According to the White House, the $40 billion for bridge repair, replacement and rehabilitation is the single largest dedicated bridge investment since construction of the interstate highway system began in the 1950s.

The bill puts $7.5 billion toward a national network of plug-in electric vehicle chargers along highways, as well as within communities where people live, work and shop. It’s a tiny part of the overall package, but it helps advance the Biden Administration’s goal to promote clean transportation and lower the nation’s carbon emissions.

Explore: The Cost of Education in the United States

The bill puts $65 billion toward improving the nation’s broadband infrastructure, with the goal of making internet service more accessible and affordable for American households. Among other things, it would require recipients of federal funds to offer low-cost affordable plans, create more transparent pricing and boost competition in areas where existing providers don’t providing adequate service.

The package includes $65 billion to rebuild the electric grid, CNN noted, including thousands of miles of new power lines, along with expanded renewable energy systems. It also includes $55 billion to upgrade water infrastructure, with much of the money going toward replacing lead service lines and pipes to ensure communities have access to clean drinking water.

Discover: 6 Alarming Facts About America’s Water Industry
Find: Biden To Sign Executive Order For 50% of Cars To Be EVs by 2030: “The Future of the Auto Industry Is Electric”

The bill includes $21 billion to clean up Superfund and brownfield sites, reclaim abandoned mine land and cap orphaned gas wells.