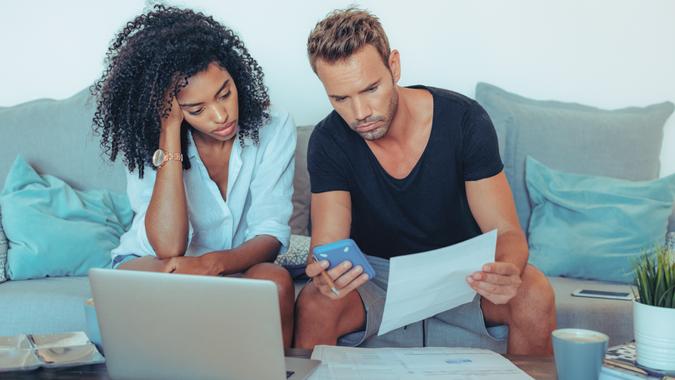 Peter C. Earle, an economist at the American Institute for Economic Research, says that if you asked five different economists what defines the middle class, you’d get six different answers. It’s a joke of course, but it begs the question: What is the middle class today?

“There are several competing definitions for the middle class,” Earle said. “Definitions have changed over time. Some of that redefining has been a reflection of changing economic [conditions] – the middle class are ‘richer,’ relatively speaking, today than they were fifty years ago – and some has been ideological: Should the middle class be defined by income? Wealth? Should it vary by household size? And should those be absolute measures, or relative to the poorest and richest in a given society?”

Check Out: Next Year’s Social Security Checks Could Get Biggest COLA Bump in 13 Years

One of the most widely used definitions comes from Pew Research Center, Earle noted.

“[Pew] takes the median of the entire spectrum of incomes and defines from two-thirds of that number to two times that number is the middle class,” Earle said. “That means that if, as it was recently, the median US income was about $80,000/yr., a household of four making between roughly $52,000 and $175,000/yr. is middle class.”

That is indeed a tremendous range.

“Imagine trying to live in Washington DC on $52K per year, or [what] $175K per year would fetch in Mississippi or Alabama,” Earle said. “But to many, that range of incomes defines the middle class.”

While we may dispute what concretely defines “middle class,” less arguable are the challenges facing this cohort.

“When inflation is rising, if wages don’t keep pace, the effect is the same as if people’s incomes were cut,” Earle said. “And where the wealthier and poorer members of society have, respectively, more wealth to ride out the price spikes or more programs to help them through (SNAP and others), often the effects of relative price increases fall squarely on the middle class.”

Earle explained that at times when inflation is persistent there’s the emergence of a phenomenon called the wage-price spiral, where price increases result in demands for higher wages, which leads to both rising demand for goods and services, and in turn higher prices.

“We saw that in the 1970s, and it begins and ends with the middle class,” Earle said.

“Healthcare is a complete disaster,” said Jarl Jensen, author of “The Big Solution: Deactivating The Ticking Time Bomb Of Today’s Economy.” “It is either unaffordable for the individual or it’s a massive drain on resources for corporations. The middle class is caught between a rock and a hard place as they sacrifice pay for benefits. Certainly the risk, to the whole family, of losing benefits outweighs the dreams of a better life.”

Big Money: Here’s How Much More Expensive Healthcare Is in the US Than 5 Other Countries

“Unless wages increase to match rises in price, individuals can afford less of what they did in former time periods,” Earle said. “Inflation is nothing if not a silent tax, and it tends to fall most heavily upon those who have to work and have little external support, such as from the government or philanthropies.

“Since inflation has been persistent other than a few scant quarters since 1971 and in limited goods like technology, for the middle class keeping up with the cost of living has been particularly difficult,” Earle continued. “This is also why the percentage of middle class families with two rather than one wage earning is rising annually.”

“Work Life Balance is a complete pipe dream,” Jensen said. “If both parents are working there is no natural balance. It’s all work. It is so difficult to just get by that the world going head on into climate/environmental/economic catastrophes seems less important than paying bills and putting food on the table.”

Earle is somewhat less pessimistic when it comes to the issue of work-life balance — but only to an extent.

“Technological innovations and more recently greater flexibility as to remote vs. office work have resulted in improved work life balance, but owing to rising costs of living most middle classers have to work a bit longer or harder every year,” Earle said.

“Child care costs are really symbolic of how difficult it is for a household to make [middle class income],” Jensen said. “It requires both parents to work. On what day in history did this happen?  On what day in history did the average 29 year old still live with their parents? It all paints a picture of a society that is madly working without a purpose, even if that very work is killing us now and in the future.”

“The residual effect from the pandemic, especially from the recent delta surge, is also an important challenge for middle-class households,” said Tuan Nguyen, U.S. economist with RSM US LLP. “Uncertainties around work-from-home policies or school opening schedules have forced middle-class families to be less certain about how they should plan their future spending. For example, uncertainty around whether or not they will have the flexibility to work from home can impact if they move ahead with a mortgage down payment or spend more on home goods, such as furnishings or appliances.”

“The problems that will persist long after the pandemic — of course given that the pandemic will end eventually, are the structural changes of the workforce and the labor market that will have deeper impacts on middle-class families,” Nguyen said. “The rise of automation and new technologies that will eventually take over a large majority of existing jobs will change the job market both for better and worse.”