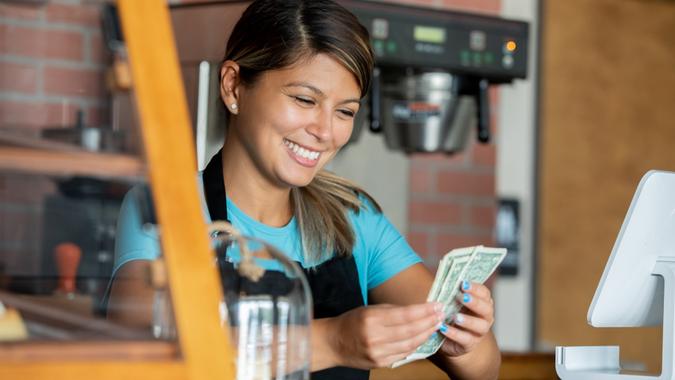 In stark contrast to continued declines in restaurant spending and grocery store visits this year, it seems that Americans are slaves to the coffee shop grind.

Learn: Despite Inflation, Americans Are Spending At Least $314 Per Month on Impulse Purchases
Find: This Credit Score Mistake Could Be Costing Millions of Americans

According to a recent study commissioned by Rabobank and conducted by Earnest Research, steady high inflation and escalating consumer prices couldn’t keep people away from spending money at coffee shops and cafes over the past year. While total restaurant spending plummeted 3.1% in June year-over-year, purchases at coffee shops and cafes rose 1.9%, per Rabobank’s analysis.

According to Statista, the U.S. is the world’s biggest coffee market by a wide margin, with revenues exceeding $80 billion, per Urban Bean Coffee. As The Wall Street Journal reported, about 66% of Americans are daily coffee drinkers, according to the National Coffee Association. This modest spending surge at coffee shops flies in the face of increased consumer prices of coffee, both away from home and brewed in-house. Per the WSJ, for the first half of 2022, the average price of a cup of a coffee in a quick-service shop was $4.90, which is a 7.6% increase from the same period in 2021, according to NPD Group data.

Brewing at home is always a cheaper option, but the cost of coffee has surged over the past year, like most consumer products. The price of coffee swelled 15.8% in June from 2021 and rose to 20.3% year-over-year in July, per Labor Department statistics.

Both the WSJ article and Rabobank study point to the rekindled routines of those Americans returning to work this year as a major factor behind the stats. Speaking to the WSJ, David Tinsley, senior economist at Bank of America Institute, said, “The basic hypothesis is that when you commute, you will buy more in coffee shops.” He elaborated from there: “You’re quite likely to buy one going into work. You’re quite likely to buy your lunch or another cup of coffee in the afternoon.”

The way consumers spend has changed, too. Not only are people skipping bigger discretionary expenditures like televisions and vacations, but they are scrimping when they do go out and spend, such as forgoing drinks or appetizers when dining out or opting for cheaper destinations like dollar stores or wholesalers when out shopping.

When it comes to coffee, however, all bets are off. Starbucks — admittedly more expensive than most other coffee shops — has seen no drop off in sales this year. It’s been quite the contrary, in fact. During its August earnings call, the company reported an increase of 9% in same store sales in the three months ending July 3 from a year earlier, despite a 5% rise in prices during that same period, according to the WSJ.

Starbucks’ Chief Executive Howard Schultz noted, “We are not currently seeing any measurable reduction in customer spending or any evidence of customers trading down.”

See: Secret Food Stamps Loophole to Get Your Starbucks Fix with EBT
Explore: Americans Each Have About $175 in Unused Gift Cards, High Inflation Makes it a Good Time to Spend Them

Going out and spending a couple of bucks on coffee isn’t treated as a burden, but as a daily indulgence or self-care allowance. Speaking to the WSJ, Marshall Escamilla, a 42-year-old podcaster and former teacher, sums up the thinking of many fellow coffee lovers.

“Think about those little expenses, and are they really things that would give you $120 worth of joy per month,” he said. “For me, personally, going into a coffee shop and getting out of the house and seeing people and being in a different environment is well worth $120 a month.”