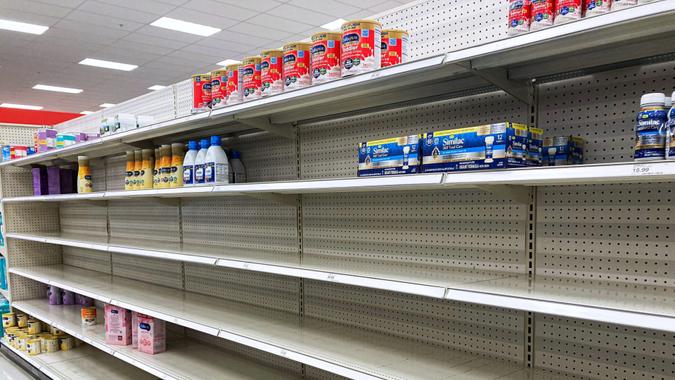 The baby formula out-of-stock rate nationwide sits at 40%, according to a report from Datasembly. In Iowa, South Dakota, North Dakota, Missouri, Texas, and Tennessee the rates were greater than 50% during the last week of April.

Shopping: 10 Dollar Store Items That Aren’t Even Worth the Buck
Read: 9 Bills You Should Never Put on Autopay

“This issue has been compounded by supply chain issues, product recalls and historic inflation,” Datasembly CEO Ben Reich said in a report from mid-April. “Unfortunately, given the unprecedented amount of volatility to the category, we anticipate baby formula to continue to be one of the most affected products in the market.”

As Reich outlined, several factors come into play that are exacerbating the shortage and forcing some retailers to limit quantities of baby formula purchased.

Target limited online purchases to four units per customer, but shoppers can buy as much formula as they’d like – or they can find – in Target stores, CNN.com reported.

As supply continues to drop, prices have rose by 18% between April 2021 and April 2022, CBSNews.com reported. That makes it harder for parents to afford formula when they do find it in stock, or to buy larger quantities to have on hand. The Infant Nutrition Council of America, in a statement reported by CBSNews.com, encouraged parents to keep just a 10- to 14-day supply on hand, if possible.

It also recommended that parents who do not receive WIC benefits try to purchase formula in packages of 14 oz. or larger, leaving the smaller, WIC-approved sizes for those who receive benefits. However, shortages may force parents to purchase whatever sizes they can find.

Abbott Nutrition, manufacturer of Similac, in a statement to CNN.com, urged parents to “purchase only what they need.”

Baby formula sales are also up 17%, which is double what birth rates indicated they should be, CNN.com reported. Only 25.6% of infants in the U.S. were exclusively breastfed from birth to 6 months in 2017, according to CDC data. One study showed that the rate of infants receiving any breastmilk at 6 months dropped from 65% to 57% during the pandemic, largely due to lack of support and resources, according to the study. Fewer parents breastfeeding would lead to an unexpected, increased demand for formula that outpaced birth rates in the months during and following the pandemic.

Formula manufacturers are doing what they can to address the shortage. Enfamil told CNNBusiness that it has begun shipping 30% more formula than normal. But issues that include transportation, labor, and logistics make it hard to get products on store shelves as quickly as needed. Manufacturers face challenges securing key ingredients and packaging materials, along with labor shortages in manufacturing facilities.

Abbott, meanwhile, has struggled with production following a recall from the U.S. Food and Drug Administration after suspicions of bacteria, including Salmonella, in the formula. An Abbott spokesperson told CNN.com that products tested for the bacteria came back negative, and that the deadly Cronobacter sakazakil bacteria found in environmental testing was “in non-product contact areas of our Sturgis facility and has not been linked to the two available patient samples or any other known infant illness.”

Find Out: Unplug These Appliances That Hike Up Your Electricity Bill
Discover: 25 Extra Grocery Costs You’re Probably Forgetting About

Abbott told CNN.com that it is currently working with the FDA to re-open its Michigan plant but has ramped up production in its other facilities that supply formula to U.S. retailers.