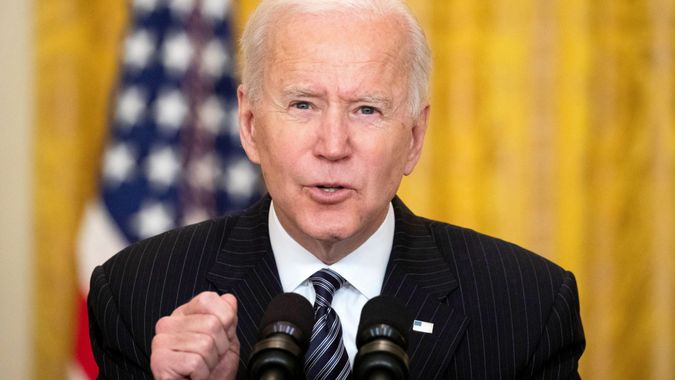 President Biden made remarks on the state of the job market after April’s job report missed expected added jobs by over 650,000, adding just 266,000 instead of the 1 million projected by Dow Jones, CNBC reported.

In televised remarks Monday afternoon, Biden attempted to ease fears that economic recovery had come to a halt, adding context to the jobs report and giving more information as to how the stimulus bill is helping still-ailing areas of the economy.

“I never said, and no serious analyst ever suggested, that climbing out of the deep, deep hole our economy was in would be simple, easy, immediate or perfectly steady. Remember, 22 million Americans lost their jobs in this pandemic. So, some months will exceed expectations; others will fall short. The question is, ‘What is the trendline? Are we headed in the right direction? Are we taking the right steps to keep it going?’ And the answer, clearly, is yes,” Biden said.

See: Economy Got a Jumpstart in First Quarter, as GDP up 6.4%
Find: Little-Known Facts About Our Neighboring Economies

He then went on to reference the jobs report directly, adding that vaccination rates have significantly increased since data for the jobs report was collected, suggesting more Americans will be able to go back to work in the coming months.

“These monthly reports are a snapshot … They take one week, a moment in time. Since this snapshot was taken around the week of April the 12th, COVID-19 counts are down by more than 40% … Vaccination rates among working-age Americans [have] roughly doubled since then. This survey was taken before adults — before every adult was eligible to be vaccinated. So, back then, 18% of working age adults were fully vaccinated. Today, if it were taken, 34% are fully vaccinated.”

See: New Poll — Most Americans Upbeat About Economy for First Time During Pandemic
Find: The American Families Plan Has a High Price Tag — Here’s Everything Included in the Cost

Biden outlined five initiatives the government would be implementing as early as this week as part of the American Rescue Plan to stimulate and sustain job growth:

See: As the US Readies for a Post-COVID Boom, American Factories Are Desperate for Workers
Find: Are ‘Bridge Jobs’ a Good Idea to Cover Career Gaps?

Biden added that despite the lagging April jobs report, economic recovery is on the right track. “Because of the American Rescue Plan, forecasters are projecting we’ll see the fastest economic growth in 40 years in the months to come. We’re moving in the right direction.”

Republicans have been critical of the president’s policies, warning that the $300 weekly payments the unemployed receive on top of their state benefits has swayed many from returning to work, The New York Times reported. And more generally, Republicans say the size of the American Rescue Plan risks triggering runaway inflation, which could hamper recovery.