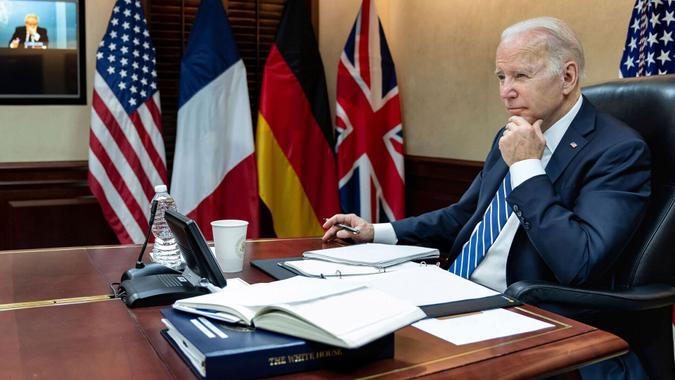 On March 8, President Joe Biden announced that the U.S. would ban all imports of Russian oil, as a continuation of the slew of economic sanctions on the country since the start of the war against Ukraine.

See: How Much Does the President Control Gas Prices?
Find: Gas Prices Reach Historic Highs — How Much More Will You Pay at the Pump This Year?

“Today I am announcing the United States is targeting the main artery of Russia’s economy. We’re banning all imports of Russian oil and gas and energy,” Biden said in remarks from the White House, according to CNN. “That means Russian oil will no longer be acceptable at U.S. ports and the American people will deal another powerful blow to Putin’s war machine.”

The Associated Press reports that the U.S. could replace Russian crude with imports from Saudi Arabia and the United Arab Emirates, while Russia might find alternative buyers for that fuel, perhaps in China or India. Such a step “would introduce massive inefficiency in the market,” which escalates prices, said Claudio Galimberti, senior vice president of analysis at Rystad Energy.

According to the American Fuel and Petrochemical Manufacturers (AFPM) trade association, in  2021, the U.S. imported an average of 209,000 barrels per day (bpd) of crude oil and 500,000 bpd of other petroleum products from Russia. Although Russian crude accounts for only 3% of U.S. crude oil imports and about 1% of total crude oil processed by U.S. refineries — Russian crude oil imports are important to refineries on the West Coast and Gulf Coast.

Also on March 8, the U.K. announced it will phase out the import of Russian oil and oil products by the end of 2022.

“This transition will give the market, businesses and supply chains more than enough time to replace Russian imports – which make up 8% of U.K. demand,” Kwasi Kwarteng, U.K. Business and Energy Secretary tweeted. “The U.K. is a significant producer of oil and oil products, plus we hold significant reserves. Beyond Russia, the vast majority of our imports come from reliable partners such as the U.S., Netherlands and the Gulf. We’ll work with them this year to secure further supplies.”

In addition, the European Commission proposed an outline of a plan to make Europe independent from Russian fossil fuels well before 2030, starting with gas, in light of Russia’s invasion of Ukraine, according to a European Commission statement on March 8.

See: Biden to Announce US Crypto Strategy as Warning Issued on Russia Avoiding Sanctions with Digital Currencies
Find: Airbnb Waiving Fees for Rentals Booked To Support Ukraine, but Are There Risks To Donating This Way?

“We must become independent from Russian oil, coal and gas. We simply cannot rely on a supplier who explicitly threatens us,” Commission President Ursula von der Leyen said in the statement. “We need to act now to mitigate the impact of rising energy prices, diversify our gas supply for next winter and accelerate the clean energy transition.”