Biden Approves $800M in Security Aid for Ukraine — Where Does the Money Come From and Does It Affect Your Finances? 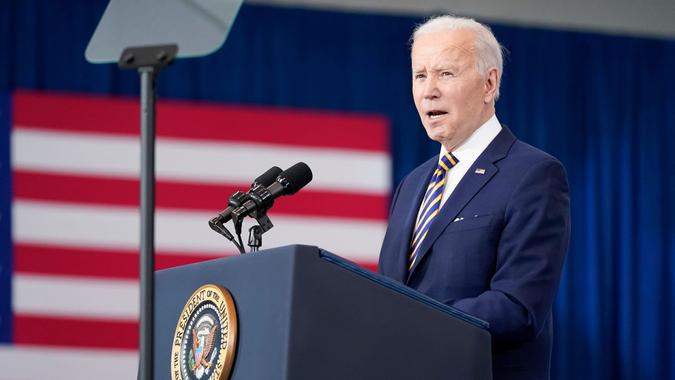 Following an impassioned plea from Ukraine president Volodymyr Zelensky, President Joe Biden agreed to send $800 million worth of additional aid to the Ukraine. This aid comes in the form of 800 Stinger anti-aircraft systems, 9,000 anti-armor systems, 2,000 Javelins, and 7,000 small arms, HuffPost reports. The latter is for use by civilians to defend themselves against the Russian army. The U.S. government is also sending 20 million rounds of ammunition, 100 drones, and 25,000 sets of body armor and helmets, according to HuffPost. Whether there will be any economic repercussions for Americans as a result of this additional foreign aid spending remains to be seen.

The package includes funding to help 3 million displaced Ukrainians. “This new package on its own is going to provide unprecedented assistance to Ukraine,” Biden said in a speech at the White House on March 16.

In a video shown on March 16, Zelensky directly begged Biden to “be leader of the world,” and, as such, “the leader of peace.” He asked the president to close the sky over Ukraine.

However, instituting a no-fly zone over the Ukraine could plunge the U.S. directly into the war, a move that Biden said would start “World War III,” HuffPost reported.

In lieu of closing the airspace, Biden opted to send additional aid on top of the $200 million package approved last weekend. He is using presidential authority to transfer the equipment to the Ukraine from the U.S. Department of Defense.

Additionally, the $1.5 trillion government funding bill that passed on March 15 included $13.6 billion in assistance to the Ukraine, CNBC reported.

As the U.S. grapples with rising gas prices, poverty, and pandemic recovery, some Americans may wonder if providing aid to the Ukraine should take fiscal priority.

Military spending is factored into the U.S. budget, with 20% of the federal budget, on average, going toward the military defense budget. An additional line item in the budget, separate from military defense but closely related, is “international affairs.”

In 2020, the U.S. spent $68 billion on areas such as “delegating humanitarian assistance and supporting international development,” according to a report from TheSoldiersProject.org. In 2019, the Department of Defense — the agency that is providing most of the weaponry to the Ukraine — implemented $14.1 billion in foreign assistance programs, according to a report from Congress.

Learn: Airbnb Waiving Fees for Rentals Booked To Support Ukraine, but Are There Risks To Donating This Way?
Explore: Pfizer Donates All Profits in Russia to Ukraine

Military, humanitarian, and defense expenditures are factored into the federal budget in acts like the $1.5 trillion omnibus spending bill that passed March 15. The federal government is taking money allocated to foreign aid, defense, and international affairs and using it to address the crisis in the Ukraine.