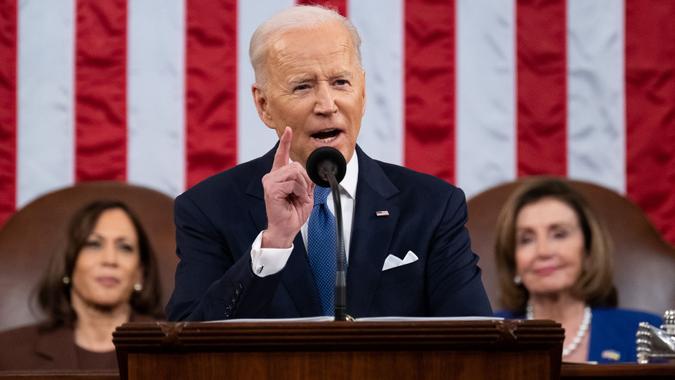 In President Biden’s State of the Union address on Mar. 1, the commander in chief blamed the surge in inflation partially on companies that operate in a market with little competition, like the shipping industry.

Learn: Social Security COLA No Match for Inflation — These Retirement Savings Options Could Help
Discover: How Shopping for Groceries at Costco Can Help You Beat Inflation

“We see it happening with ocean carriers moving goods in and out of America,” he said. “During the pandemic, these foreign-owned companies raised prices by as much as 1,000% and made record profits.”

Bloomberg noted that the biggest issues are the three main shipping alliances, where Asia- and Europe-based rivals share vessel capacity on major trade lanes and are able to evade U.S. antitrust laws. The World Shipping Council’s argued that “market dynamics are influencing prices — not carrier alliances.”

The U.S. Department of Justice has been pushing Congress for decades to dispose of the antitrust immunity, saying that it undermined a free-market economy, according to a separate Bloomberg report.

The Federal Maritime Commission (FMC) and the Antitrust Division plan to form a task force to investigate ocean shipping lines for potential violations to the Shipping Act and other U.S. laws, the White House said in a Feb. 28 statement, as reported by S&P Global.

Citing research from the Kansas City Fed and the European Central Bank, the White House stated that these shipping cost increases are expected to contribute to a 1% increase in consumer prices over the next year.

“Meanwhile, the ocean carrier companies are experiencing elevated profits and soaring profit margins,” the White House said. “Estimates suggest that the container shipping industry made a record $190 billion in profits in 2021, a sevenfold increase from the previous year and five times what it made over the entire period from 2010-2020.”