The Supply Chain is Broken Again for Chicken, Ketchup and Computer Chips 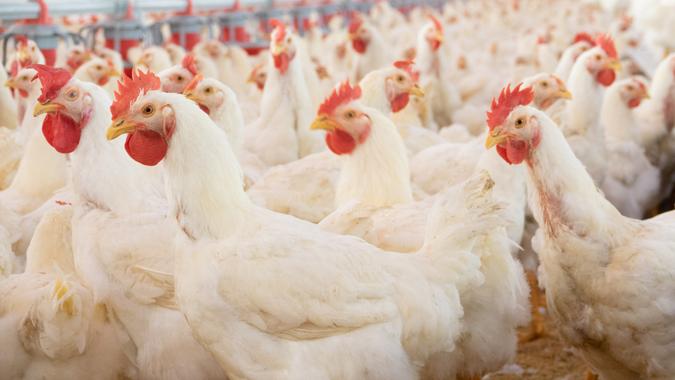 If you find yourself sitting in a wooden lounger by the pool this summer, eating a chicken sandwich with ketchup and fiddling around on your smartphone, congratulations: You are indulging in some very precious commodities.

Lumber, chlorine, chicken, ketchup packets, computer chips and metals are among the goods that are hard to find these days, CNN Business reported on Monday. The shortage is due to a combination of factors, ranging from bad weather and industrial accidents to cyberterrorism and supply chain disruptions caused by COVID-19.

Other commodities in short supply include steel and gasoline, the latter of which might see prices rise from the current $2.96 national average to above $3 a gallon — their highest level in seven years — following a cyberattack late last week that disrupted operations at the Colonial Pipeline, Bloomberg reported.

The chicken supply took devastating hit from harsh winter weather in Texas and other major chicken-producing states, USA Today reported, resulting in a 4% decrease in the number of meat chickens slaughtered for consumption during the first half of 2021. “Chicken sandwich wars” between major chains such as KFC and Buffalo Wild Wings have increased demand, driving prices higher and causing some restaurants to limit how much they serve.

See: 10 Supply Shortages That May Happen Again This Year
Find: Now Could Be a Good Time to Sell Your Used Car

Changing consumer patterns caused by COVID-19 contributed to the ketchup-packet shortage, as an increase in takeout and delivery orders caused restaurants to stock up on individual packets, which quickly dwindled the supply.

Meanwhile, CNBC noted that the nation’s widespread chlorine shortage is expected to worsen as both homeowners and pool operators prepare for summer. One cause of the shortage was a fire at a chemical plant in Louisiana that was damaged by Hurricane Laura last August.

The computer chip shortage is largely the result of COVID-19, which forced much of the world indoors and created a run on semiconductors from tech companies whose products gained in popularity during the lockdown. The shortage caused Apple, the world’s top buyer of chips, to delay the launch of its iPhone 12 by two months, Forbes reported.

Other commodities like lumber, metals and steel have seen their prices hit record highs in recent weeks. Production of these items slowed during the COVID-19 pandemic, reducing the supply. But the economic recovery in many countries has lately caused demand to spike.