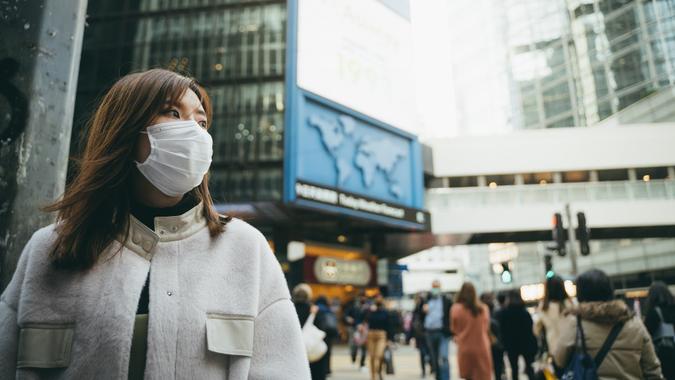 A recent surge of COVID-19 cases in China tied to the Omicron variant could lead to continued global supply chain problems and even higher inflation, dimming hopes of a strong economic recovery this year.

See: Will Surging Gas Prices Cause a Recession?
SNAP & Medicaid COVID-19 Benefits Expire April 15: What States, Territories Will be Impacted?

Several leading manufacturing cities in China have ordered lockdowns in the wake of the country’s biggest surge of COVID infections in more than two years, The New York Times reported. These include Shenzhen, China’s tech center and a major port city located next to Hong Kong; and Dongguan, another manufacturing center adjacent to Shenzhen.

Because of China’s importance as a global manufacturing giant, the lockdowns are expected to create even more supply chain problems and product shortages, just as much of the rest of the world is easing pandemic restrictions and eyeing a post-COVID economy. Any disruptions to Chinese exports that result in supply shortages could also drive international inflation higher, Bloomberg reported.

It all makes for a gloomy scenario for those who had hoped the global economy would finally find firmer footing after two years of nonstop headwinds. A survey of fund managers conducted in the week through Mar. 10 by Bank of America found that confidence in global economic growth is the lowest since July 2008. Meanwhile, expectations for stagflation — the combination of rising inflation and stalled economic growth — climbed to 62%.

Bloomberg Economics warned that the Shenzhen restrictions could inflict the biggest pandemic-related blow to China’s growth since a nationwide lockdown in 2020.

“The forceful action to contain the worst COVID-19 outbreak since early March [2020] will deal a direct hit to the production and consumption sides of a province that accounts for 11% of GDP,” said Chang Shu, Bloomberg’s chief economist for Asia. “Previous steps to contain virus flareups left manufacturing unscathed for the most part. This lockdown will hit output in key industries such as tech and machinery that feed into global supply chains.”