Chipotle Ups Menu Prices by 4% To Adjust for Wage Increase 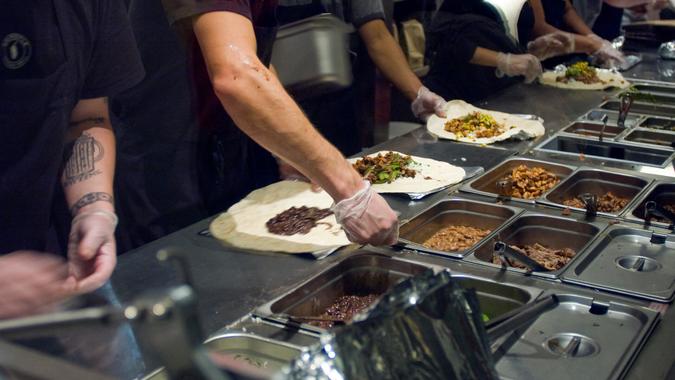 Chipotle has increased its menu prices by  approximately 4% to cover the cost of raising its workers’ wages, which should reach an average of $15 an hour by the end of June.

See: Costco, Amazon and 16 Other Companies That Raised Their Minimum Wage to $15 (or More)
Find: Here’s What the US Minimum Wage Was the Year You Were Born

Last month, the company announced that the wage increases for new and existing hourly and salaried restaurant employees would be “rolled out over the next few weeks and will result in hourly crew members starting wages ranging from $11-$18 per hour,” according to a statement.  In addition, it said it had also introduced a $200 employee referral bonus for crew members and a $750 referral bonus for apprentices or general managers. The move came as several restaurant chains are struggling to find workers.

Speaking at the Baird Global Consumer, Technology & Services Conference yesterday, CFO Jack Hartung said that they would have to increase prices to make up for the raises.

“Our approach was to get in front of this and lead, to first invest in our people and then to do the right thing. So, we can pass that through. So, it feels like the right thing at the right time. And it feels like the industry is now going to have to either do something similar or play some kind of catch up. Otherwise, you’ll just lose the staffing game, and if you lose the staffing game in this business, it’s not going to end well,” he said, according to a transcript.

Discover: The Economy and Your Money: All You Need To Know
More: Do You Think the Minimum Wage Should Be $15? Take Our Poll

Hartung added that the company will see “what resistance, if any, we see and then see what happens to the labor markets.”

“But, you know, so far, we like how things have played out so well – you know, so far, in terms of the response to the increase both from our existing people, as well as applicants as well. So that part of the move was the most important part, and we’re pleased with how that’s gone so far.”