How Did COVID-19 Restrictions in Different States Impact Local Economies? 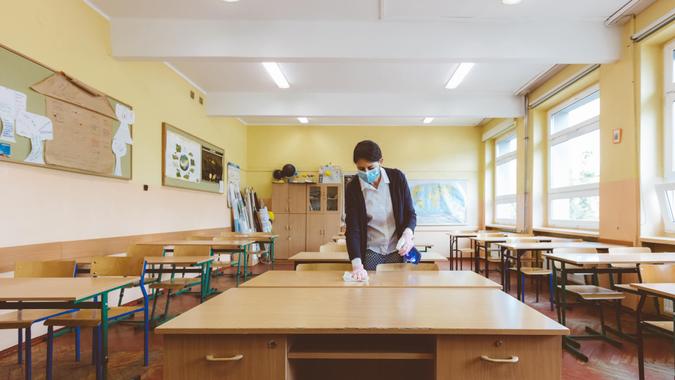 America is tallying the lowest number of COVID-19 cases since July 2020. Major chains like Walmart, Costco, Target and CVS have dropped their mask mandates. About half the adult population has received at least one dose of vaccine and hundreds of thousands of children ages 12-15 have now gotten shots of their own.

In short, it’s almost over — which makes now a perfect time to look back.

So, who was right?

GOBankingRates researched how states with the strictest lockdown measures fared economically compared to those that enforced the fewest rules possible. To compare the economies of the two groups of states, GOBankingRates consulted the stringency index developed by researchers at Oxford University’s Blavatnik School of Government. GOBankingRates then supplemented that data with information from sources like the Bureau of Labor Statistics and the Census Bureau.

The results are not all-encompassing, but they are clear. One side ran the table, doing better across the board on good things like consumer spending and GDP growth while also avoiding the worst hits on negative things like unemployment and small-business closures.

Discover: Here’s How Much You Need To Earn To Be ‘Rich’ in Every State

Here’s how the two sides stacked up.

Meet the States at the Extremes

The following is a list of the 10 states with the fewest COVID-19 economic restrictions, in order of least regulated to most:

These 10 states had the most stringent COVID-19 rules in the country. They’re listed in order of the most restrictive to the least:

As you can see, the states with the fewest restrictions are grouped in the Mountain West, the South, the Midwest, and the Southwest, and are generally among the most politically conservative states in America. The entire West Coast, East Coast and Northeast are excluded — with the deep blue New England state of New Hampshire standing out as the one glaring exception.

Read: 22 Side Gigs That Can Make You Richer Than a Full-Time Job

The states with the strictest regulations are all politically liberal and are concentrated on the West Coast, East Coast and in New England. Here, too, there’s one glaring exception — deep red, deep South Louisiana.

One of the clearest trends from the study goes straight to the heart of the debate over COVID-19 restrictions: the ability to earn a living.

Find Out: How To Go Back To Work And Still Keep Unemployment Benefits 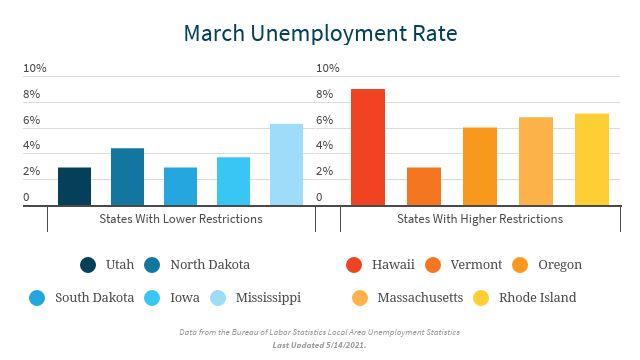 In the 10 least restrictive states, on the other hand, the average jobless rate this March was a much lower 4.2%. Just two states, Mississippi and Arizona, went over 6%. The rest were in the fours or better.

Not only were the more permissive states enjoying much lower unemployment one year after the pandemic started, but they did much better in terms of overall job losses during that year as a whole. The average year-over-year change in employment was -2.4% in the least-restrictive states, with North Dakota doing the worst at -5.2%.

Economy Explained: How Do We Track Unemployment and Joblessness?

In the 10 strictest states, the average year-over-year change in employment was more than three times worse at -7.7% — Hawaii alone suffered employment losses of 16%.

Small Businesses Suffered More in Lockdown States, but Not by Much

Small businesses faced a ruthless culling during the pandemic no matter where they were located. In the 10 states with the tightest restrictions, nearly one small business in three that was open in January 2020 was not in May 2021. A painful closure rate of 31.7% was the average between all 10 states. 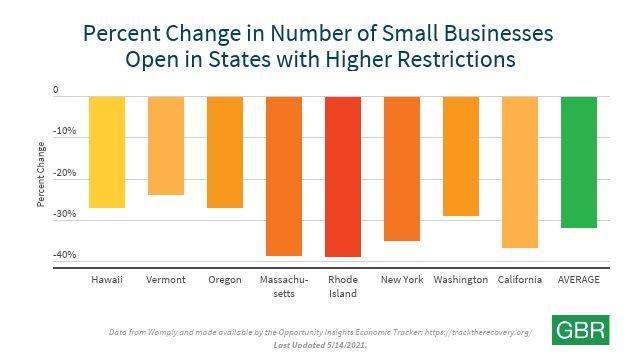 On the other end of the spectrum in the states with the fewest shutdown rules, the average small business closure rate was 26.2% — better, but still awfully bad.

Spending Was Up, Especially in States That Stayed Open

Consumer spending increased nationwide between January 2020 and May 2021. Despite the job losses and uncertainty, the stock market soared, people had more time to pay their taxes and people who weren’t driving, going out or taking vacations had more disposable income. Most importantly, expanded unemployment benefits and several rounds of stimulus payments fattened savings accounts and kept people swiping that plastic.

Learn More: Understanding US Productivity and All the Ways It Affects You

If you live in the bloc of Midwestern, Southern and Western states that resisted shutdowns, you might have spent a little more than the rest. The average change in consumer spending from the start of 2020 to now in those 10 states was 12.2%. Mississippi knocked it out of the park with an increase of 24.8%.

The coastal states that embraced shutdowns weren’t far behind with an average increase in consumer spending of 11.4%.

Read: What the Unemployment Rate Means for You and the Economy

All that new consumer spending helped to grow the economy. State GDPs rose all over the country, but here, too, things were better where rules were looser. GDP growth between Q3 and Q4 2020 in states where COVID restrictions were lenient was 5.6% compared to 3.1% for the most highly regulated states.

In these categories, at least, the numbers don’t lie. Across all major metrics, the states that stayed open did better economically than those that shut down.

Methodology: To compare the economies of states with higher and lower COVID-19 restrictions, GOBankingRates first identified the 10 states with the highest and lowest scores on the stringency index developed by researchers at Oxford University’s Blavatnik School of Government as of April 5, 2021. The stringency index measures “the strictness of ‘lockdown style’ closure and containment policies” adopted by states to restrict individual behavior. The nine policy categories taken into account by the index include school closings, workplace/business closings, restrictions on gathering size and stay-at-home requirements.