Consumer Price Index: How Much Did Inflation Increase the Price of Bacon, Bread and Eggs? 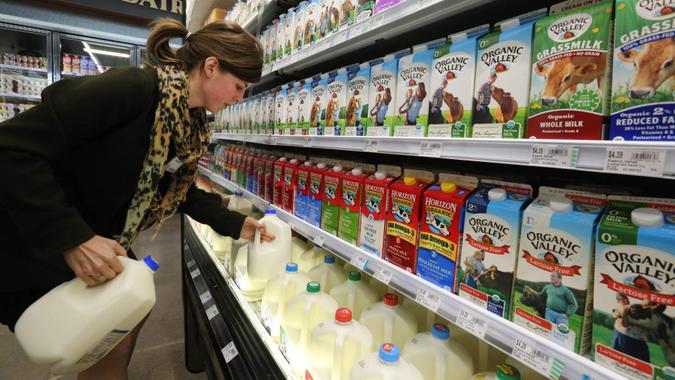 Americans continued to pay more for food in April — particularly for eggs and dairy products — though the rate of inflation eased from previous months, according to the latest U.S. government figures.

POLL: Do You Think the Fed Raising Rates Will Help or Hurt the Economy?
Discover: Consumer Price Index: How Much Did Inflation Increase in April 2022?

Overall food prices for April 2022 climbed 0.9% from the previous month. This was a slowdown from the 1% monthly gains recorded in March and February, the Bureau of Labor Statistics announced Wednesday in its latest Consumer Price Index (CPI) for All Urban Consumers report.

Year-over-year, food prices climbed 9.4%, which was above the overall inflation rate of 8.3%.

Americans continued to see much higher prices at grocery stores, with food-at-home prices surging 10.8% year-over-year in April — the largest 12-month increase since November 1980. About the only good news was that the food-at-home index in April climbed 1% from the previous month, a slowdown from the 1.5% gain seen in March.

Five of the six major grocery store indexes experienced monthly increases in April. The biggest hike among the indexes, at 2.5%, was for dairy and related products. That was the category’s highest monthly price increase in nearly 15 years. The index for nonalcoholic beverages also saw a sharp increase, at 2%.

If you are a bacon and meat lover, April wasn’t quite as bad on your wallet. The index for meats, poultry, fish, and eggs rose 1.4% — pushed much higher by a 10.3% surge in the price of eggs.

Eating out was a little easier on American wallets. The food away-from-home index rose “only” 7.2% year-over-year. That was mainly because limited-service meals saw a 7% gain. Things weren’t as good for those who prefer a full-service dining experience, however. The index for full-service meals climbed 8.7% over the last year, which was the largest 12-month increase since the inception of the index in 1997.

On a brighter note, the index for food at employee sites and schools fell 30%, “reflecting widespread free lunch programs,” the BLS said.

Food prices have been pushed higher this year not only by the overall inflation rate in the United States but also by global events that have impacted the rest of the world. One of those events is Russia’s invasion of Ukraine. As previously reported by GOBankingRates, those two countries accounted for around 30% and 20% of global wheat and maize exports, respectively, over the past three years.