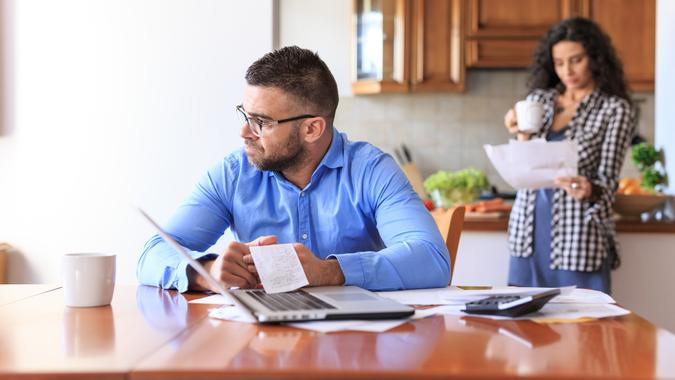 The Labor Department released its Consumer Price Index on April 12 and the 12-month increase, which has been steadily rising, is the largest since the period ending December 1981, and slightly higher than economists’ expectations. Indexes for gasoline, shelter and food were the largest contributors to the seasonally adjusted all items increase, with gas accounting for half of the increase, according to the Labor Department.

POLL: Where Have You Cut Back Most Because of Inflation?
SNAP 2022: Is My State Giving Out Extra Money in April?

Over the last 12 months, the all items index increased 8.5% before seasonal adjustment. Here again, the indexes for gasoline, shelter and food were the largest contributors to the seasonally adjusted all items increase.

The CPI, which measures what consumers pay for goods and services including clothes, groceries, restaurant meals, recreational activities and vehicles increased 1.2% in March, on a seasonally adjusted basis, after rising 0.8% in February.

Economists expected the consumer price index to rise at an 8.4% annual rate in March, up from 7.9% in February and at the fastest pace since 1982, according to the Wall Street Journal.

Austin Graff, Portfolio Manager at TrueMark Investments, who runs DIVZ, a dividend based ETF that works as a hedge against inflation, told GOBankingRates that the annual CPI growth of 8.5% for the month of March is the highest year-over-year increase since 1981.

“In recent months we have seen the causes of inflation broaden from supply chain constraints to insufficient labor supply, war in Ukraine or even rationalized drilling from oil and gas companies. Given the increasing sources of inflation the market appears to be expecting elevated inflation levels to persist longer than initially expected,” Graff said.

“Fed policies alone are likely not enough to get inflation under control. With higher and more persistent inflation than many expected, investors should look to attractively priced, high quality dividend paying equities that benefit from higher prices. Energy, materials and financials are sectors that are currently trading at a discount and can benefit from higher prices and higher interest rates as markets normalize,” he added.

The gasoline index rose a staggering 18.3% in March and accounted for over half of all items’ monthly increases. This also represents a steep hike from the 6.6%  increase in February.

John Catsimatidis, chairman and CEO of Red Apple Group — which owns and operates United Oil Refinery and 400 gas stations — as well as chairman and CEO of Gristedes & D’Agostino’s Supermarkets, told GOBankingRates: “As I predicted a few weeks ago, I anticipated the inflation numbers to be this high, based upon what is happening at the gas pump and in the food stores, and I believe that these prices are only going to go up over the next 60-to-90 days.

“The CEOs are trying to stay in front of the curve and shifting price increases to reflect anticipated increases in cost,” Catsimatidis said. “The stock market being up reflected increases in sales of these companies, and subsequently, profits because of this. The poor and middle class, and those living on a fixed income, are suffering greatly and will continue to suffer as inflation increases. The corporate executives are smart enough, and have the power to stay ahead of the curve.”

The energy index rose 11% in March following a 3.5%  increase in February. The index for electricity increased 2.2 percent in March, while the index for natural gas rose 0.6 percent over the month.

Over the past 12 months, the energy index rose 32% with all major energy component indexes increasing. The index for gasoline rose 48% over the last year and the index for natural gas rose 21.6% The index for electricity rose 11.1% for the 12 months ending March.

The food index rose 1% and the food at home index rose 1.5%. All six major grocery store food group indexes increased in March. The index for fruits and vegetables rose 1.5%, decreasing from 2.3% in February.

The index for meats, poultry, fish, and eggs increased 1% in March, while the index for cereals and bakery products rose 1.5%, and the dairy and related products index increased 1.2% in March.

The index for all items less food and energy rose 0.3% in March following a 0.5%  increase in February. The shelter index was by far the biggest factor in the increase, with a broad set of other indexes also contributing, including those for airline fares, household furnishings and operations, medical care, and motor vehicle insurance.

See: Unplug These Appliances That Hike Up Your Electricity Bill
Find: The Best and Worst Things To Buy Generic

In contrast, the index for used cars and trucks fell 3.8% over the month.

On April 10, the White House had warned about higher inflation, with White House press secretary Jen Psaki saying at her press briefing “we expect March CPI headline inflation to be extraordinarily elevated due to Putin’s price hike,” according to CNBC.