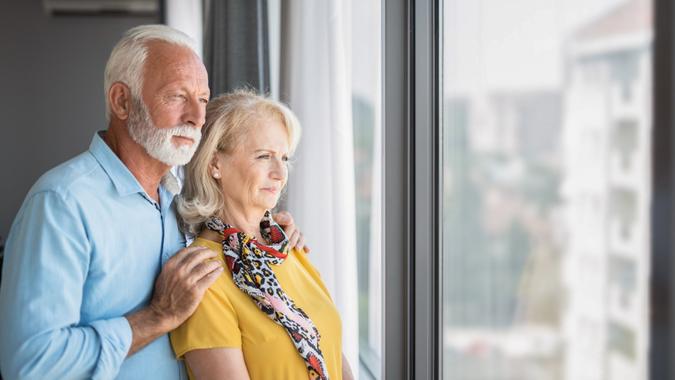 The University of Michigan’s final numbers on consumer sentiment showed a slide to 66.8, it’s lowest level in ten years, from a final October reading of 71.7.

Give Us Your Take: How Much Will You Spend Over the Holidays Relative to Last Year?
Find: How to Refinance a Mortgage

Consumers’ views of current economic conditions fell from 77.9 in October to 73.2 in November.

Michigan credits this to escalating inflation and the “growing belief among consumers that no effective policies have yet been developed to reduce the damage from surging inflation.” One in four consumers cited inflationary reductions in their living standards in November, with lower-income and older consumers voicing the greatest impact.

Jonathan Silver, founder and CEO of global insights and data firm Affinity Solutions, which measures consumer purchasing habits based on almost 100 million monthly cardholder transactions, shared insight as to why.

See: Consumer Confidence Index Up Slightly, But Indicates Many Are Proceeding With Caution
Find: How COVID-19 Has Impacted Retirement Savings

“Regarding income, whereas last year people with higher incomes saw their spending drop at a much higher rate than lower income households and were much slower to recover, that’s flipped in the last seven to eight months. It’s the higher income groups driving spend[ing], going out to restaurants, buying discretionary items. They’ve been carrying the economy, spending like there’s no tomorrow,” he said in an exclusive interview with GOBankingRates.

One more indication is there’s nothing homogeneous about this economy, Silver added, meaning that traditional trends in sentiments and economic data are different post-pandemic.

“This also explains how you can see lower consumer confidence, which is likely driven by lower income groups, while higher income groups are less affected. They have money, lots of it. All of those months of people staying at home, lots of money was accumulating, more than $2 trillion in savings,” Silver said.  This further supports the University of Michigan’s findings that lower consumer sentiment was seen in primarily younger and older consumer groups.

See: What You Need to Know About Economic Inequality and Its Impact on You
Find: What to Do If You’ve Depleted Your Savings Over the Last Year

Nominal income gains were also widely reported among participants, but when asked about inflation-adjusted gains, half of all families anticipated reduced real incomes next year.

Indeed, there has already been evidence of this, as a recent report by the Bureau of Labor Statistics showed that real wages increased 0.4% in the month of October but that top-line inflation for October hit almost 1%. This means consumers’ concerns about inflation-adjusted gains are already being realized in real time, and perhaps sooner than they expected.

The DOL also reported that overall inflation added another 0.9% on top of 12 straight months of increasing prices, bringing inflation up 6.2% over the last year.

Silver added that these discrepancies in earnings only highlight deeper issues in the economy. “The paradox of lower consumer sentiment and higher overall spend is due to this dual economy dynamic and puts a spotlight on the income inequality issues that exist.”