Consumers Are More Secure With Personal Debt Levels Than US Economy at Large — What Will Turn the Tide? 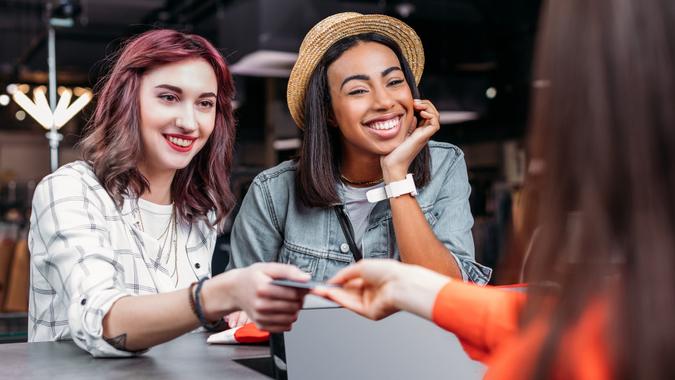 With inflation at a 41-year high, and interest rates continuing to rise, plus exploding food and gas prices, it’s not surprising that Americans’ faith in the economy is waning. However, a new CivicScience survey found that half of Americans are comfortable with the amount of debt they have despite these shortfalls.

See: 10 Dollar Store Items That Aren’t Even Worth the Buck
Discover: 9 Bills You Should Never Put on Autopay

The findings are in line with the April 2022 Survey of Consumer Expectations, released May 9 by the Federal Reserve Bank of New York, which found that household spending expectations increased by 0.3% to 8% for the month, marking a new series high.

“This is not surprising to me,” Courtney Godshall, Vice President of Media Insights at CivicScience, told GOBankingRates. “There are a lot of factors right now that I would attribute to the decline in economic sentiment. A few being inflation, rising gas/energy prices, stock market volatility and increasing interest rates. Recent consumer shopping data has shown that these economic factors are having significant impact on consumer sentiment and spending right now. I think negative sentiment toward the economy will continue until we see shifts in some of these issues.”

In terms of debt, 73% carry some type of debt, with more than half of Americans saying they are comfortable with the amount they carry — 31% said they are “very comfortable,” while 21% say they are “somewhat comfortable,” CivicScience noted.

In terms of the type of debt those surveyed carry, 39% have credit card debt, 34% mortgages, 29% auto loans and 16% have student loans. Home equity and others round out the remaining replies, with 9% each.

CivicScience’s Godshall said that there are different comfort levels with these student loan or mortgage debts compared to credit card debt. “I would hypothesize that most people look at their mortgage and auto loan as a necessary household expense, while credit card debt would cause a higher level of discomfort. We also know that student loan payments continue to be deferred, this would certainly have an impact on how those that have student loans are feeling about their debt. We could dive further into all these scenarios with more time.”

CivicScience also found that those that are uncomfortable with the amount of debt they have were disproportionately affected by the pandemic. “Despite stimulus checks and child tax credits, households that were negatively impacted financially by the pandemic have left many feeling uncomfortable,” according to the report.

“We know that even with government assistance, there were many Americans that suffered financially due to the pandemic. This was particularly true for people of color and women,” Godshall said. “We also know that many who lost their employment because of the pandemic were already in lower-income brackets. I would speculate that lost wages that were not fully subsidized by government aid resulted in many accruing more debt to pay for daily expenses. Even with employment rates rising, we are now dealing with multiple market conditions — inflation, interest rates etc. — that would make it more difficult to pay back some of this debt.”

Another key finding of the survey was that while Americans had been riding a bull market up until the pandemic and pessimism was down in 2021, that trend was short-lived.

Ted Rossman, senior industry analyst at CreditCards.com, told GOBankingRates that these findings are emblematic of a broader trend he’s been seeing in recent months: consumer sentiment is downbeat, but the actual data is more positive.

“It reminds me of Warren Buffett’s advice about being greedy when others are fearful and fearful when others are greedy,” Rossman said. “While consumers aren’t necessarily the best judges of the future path of the economy, consumer sentiment can be self-fulfilling to the extent that our economy is driven by consumer spending. A pullback could cause a recession. Yet despite the worries, we’re not seeing that in the data right now. Spending has remained robust, and even so, delinquencies are very low by historical standards, as is the debt-to-income ratio. A strong job market is helping to offset some of the worries about inflation, war, COVID, supply chain disruptions and more.”

Live Blog: Student Debt Cancellation, Gas Prices and More
Inflation and the Consumer Price Index: How They Work and How They Affect You

He added that, ultimately, what we can control is to do our best to save for emergencies and keep our debts manageable — in good times and in bad.

“It’s not always easy, but it is important to practice these fundamentals as best we can,” he said. “Paying down high-cost credit card debt is especially important since the average interest rate is 16.41% and likely headed substantially higher in the months to come. A 0% balance transfer is an excellent way to lower this interest expense — just make sure to be disciplined about paying it back, since the rate skyrockets after the term ends.”