What do you call a landfill when there’s a rather notable absence of land involved? Space might be the final frontier, but it’s also the last stop for nearly 1,900 tons of junk. From tiny fragments about a millimeter across to the massive used rocket bodies that helped launch shuttles and space stations that now orbit the planet as used husks, there are over 170 million individual pieces of space junk whirring around planet Earth at any given point in time.

But given just how expensive it is to build a satellite — let alone fire one into space — doesn’t that mean there’s a fortune in equipment currently in orbit without having any real use? Read on to learn a little bit more about the cost of old satellites and how much money mankind has spent on getting them into space only to become junk.

Space Debris Is Everywhere and Very Dangerous to Spacecraft

Plenty of people probably gazed up at the stars as kids and wondered what it would be like to travel into space. But, one has to assume, they weren’t picturing all the trash. The issue is that every piece of a ship or satellite that isn’t bolted down is probably going to wind up floating off into space once its purpose has been completed — be that decommissioned satellites, used rocket boosters or even just tools dropped by astronauts.

There are more than 170 million pieces of space debris that are at least 1 millimeter or larger, but the vast majority of that is very tiny stuff. Increase that size threshold to 1 centimeter and the number plummets all the way to 670,000, and then again to just 29,000 for pieces at least 10 centimeters in size or larger. The European Space Agency, though, cautions that even those 1-millimeter objects — whilst flying around the planet at high speed — could still do a lot of damage to a functional satellite or spacecraft.

Too much space junk could ultimately become a pretty serious issue. One NASA scientist, Donald Kessler, projected a future scenario dubbed the Kessler Syndrome in 1978. In that event, the amount of debris in space would reach a critical mass that sparks a series of orbital collisions. Those collisions would cause larger objects to shatter into pieces and create a field of debris that would essentially act like a bunch of tiny, speeding space bullets that would render any sort of human space travel impossible.

The High Price of Space Junk

So, beyond the potential ramifications of all that space junk starting to knock out satellites and preventing people from traveling to Earth orbit, what has all this cost us? After all, the space program is not cheap. How much does a satellite cost? And how much does it cost to shoot these things into space only to not need them anymore?

Unfortunately, getting a precise valuation is close to impossible given just how many different items are up there. However, arriving at a very rough calculation based on what satellites typically cost is certainly possible and can at least provide some context.

We can probably start to figure this out by trying to weed out the smaller objects that were likely once part of a larger launch. Although there are almost 30,000 pieces of debris that are at least 10 centimeters across, the NASA Institute for Advanced Concepts estimates that there are about 1,500 objects that are at least 100 kilograms of mass and represent about 98 percent of the total mass of the debris in low Earth orbit. So, for the sake of argument, let’s have those 1,500 objects stand in for satellites to get a rough estimation of what it all cost to make.

Given that the typical weather satellite costs about $290 million — according to estimates from Global.com — that would mean the 1,500 large pieces of junk currently in orbit would be worth $435 billion. And that’s probably conservative given that many other types of satellites can be considerably more expensive than weather satellites.

How Much It Cost to Put Those Satellites in Space

Of course, that $435 billion is just the value of the objects being shot up there. The cost of getting them into orbit is also considerable. It currently costs NASA about $10,000 per pound to launch something into space — or roughly four times as much as it would cost to buy a pound of Beluga Caviar. If you apply that to the estimated total weight of 1,900 tons of space junk currently in orbit, that would put the price tag at $38 billion just to transport it into space where it’s now posing a direct threat to whatever new stuff is getting launched up there at a cost of ten grand a pound.

Click through to read about SpaceX’s first tourists flying around the moon for free. 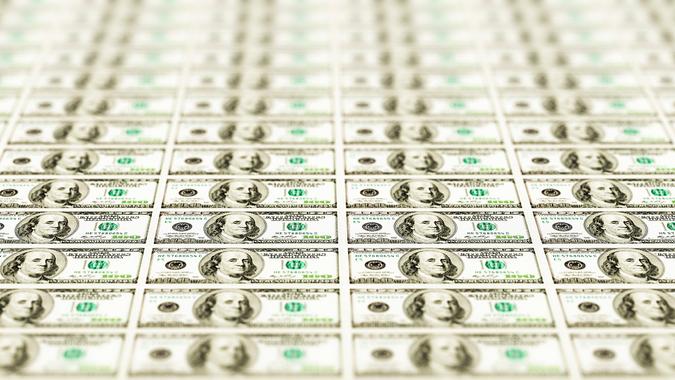 Will we soon be living in a cashless society?

> Money > Economy > How Much Money in Old Satellites Is Floating Up in Space?