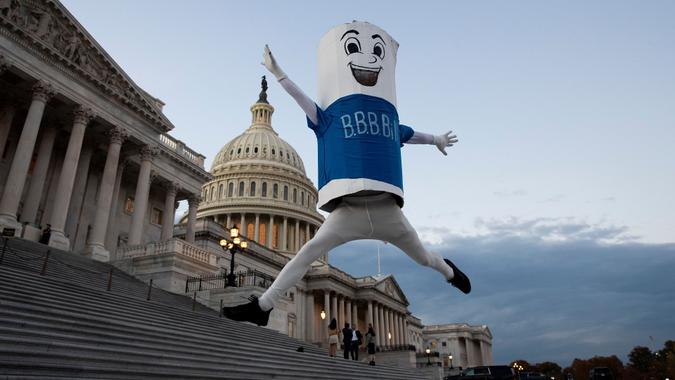 As President Joe Biden’s roughly $2 trillion infrastructure and social spending bills continue to move forward through Congress, experts warn that it could push inflation up even further.

Social Security COLA: Seniors Will Receive the Highest Increase in Decades, But It’s No Match For 6.2% Inflation Surge
Explore: As ‘Inflation Wipes Out Real Gains,’ How Much of a Raise Will You Need in 2022 To Keep Up?

Three senior economists — Mark Zandi at Moody’s Analytics, Douglas Holtz-Eakin of the American Action Forum and Harvard University professor Doug Elmendorf —  appeared on a virtual panel sponsored by the National Association for Business Economics on Nov. 17 and all agreed that the bill would add to inflationary pressures in the short term, Bloomberg reported.

The Consumer Price Index increased by .9% in October on a seasonally adjusted basis, representing a 12-month increase of 6.2% across all items. Inflation has stayed around 6% for the last several months, GOBankingRates previously reported; however, the Federal Reserve continues to say that these pressures are transitory and will eventually ease.

Related: Inflation Fears: 3 Signs That US Inflation Really Is Transitory and May Begin Tapering Off

Bloomberg also noted that even though Zandi said he didn’t think it will lead to significant price increases, “it will add a little bit to inflation.” On the other hand, Holtz-Eakin said he is a little more concerned about the near-term impact.

Elmendorf beliefs sit somewhere in the middle. “This bill goes the wrong way in the short term, but I think it doesn’t go in the wrong way very far,” he said.

Meanwhile, other economists and analysts in leading rating agencies told Reuters that Biden’s Build Back Better plan will not add to inflationary pressures in the U.S. economy. William Foster, vice president and senior credit officer at Moody’s Sovereign Risk Group, told Reuters that the impact on the fiscal deficit will be small because they will be spread over a long time horizon.

See: Inflation and the Consumer Price Index: How They Work and How They Affect You
Find: Build Back Better Could Require 150,000 New Senior Caregivers — Is Plan Realistic Given Staffing Shortages?

The administration has also argued that Biden’s agenda will help to push down inflation in the long-term by increasing the size and productivity of America’s workforce, Bloomberg said.