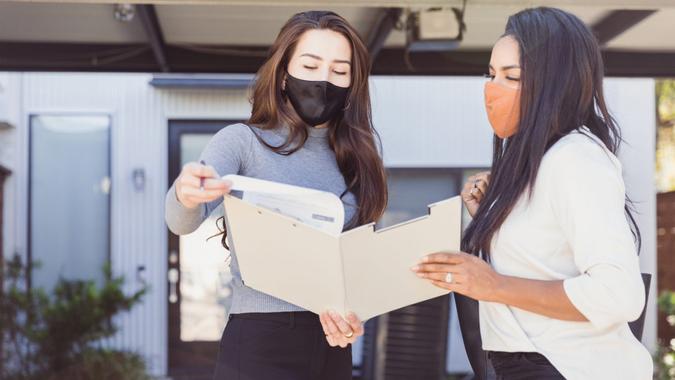 The housing market has been on a seemingly unrelenting increase for the past 12 months, despite a global pandemic. Low interest rates and wealthy city dwellers looking to flee city masses in exchange for suburban isolation caused U.S. home prices to soar.

Home ownership is up to 68.5%, Statista reports, and as far as anyone who turns on the news can tell, headlines read that America is in the middle of a housing boom.

But as with anything post-COVID, context is key.

The last housing surge occurred right before, and was a direct cause of, the Great Recession. Here are some important stats, reported by The Mortgage Reports, that shed light on market conditions leading up to the crash.

See: One Year In, Here Are the Financial Pressures Americans Have Faced During COVID-19
Find: Looking to Change Careers Due to COVID-19? You’re Not Alone

Although interest rates were much higher, they were considered to be fairly normal for the time. Mortgage requirements were far less strict, and banks were able to lend to a wider population than they are now. Unemployment was fairly low, and false confidence coupled with loose restrictions led to reckless spending and accumulations of debt.

After the crash, the government tightened the restrictions on lending with the Dodd-Frank Act, which strengthened credit standards for mortgage loans and required banks to keep a certain percentage of their assets liquid. To comply, banks increased down-payment or cash-reserve requirements on new home purchases.

Now, looking at some simple stats from right before the most recent housing boom, the numbers don’t quite add up:

See: Understanding Interest Rates — How They Affect You and the US Market
Find: 13 States Won’t Let You Claim Biden’s $10,200 Unemployment Tax Break

U.S. home prices have soared 10.8% in Q4 2020 from a  year earlier, The Wall Street Journal reports, which is the biggest annual increase in data going back to 1992. The median home purchase price rose above $300,000 for the first time last year, and nearly 25% of homebuyers between April and June bought homes priced at $500,000 or more.

See: The Pandemic Housing Market in Every State
Find: The Cost of Living Is Quickly Rising in These 20 US Cities

While we cannot quantify the exact salary of buyers, we can see for whom the homes were available.

New York Fed Consumer Credit Panel/Equifax credit score and lending data over the past 17 years, as reported by Bloomberg, shows a trend of flooding out lower credit score holders from home purchases. While this was perfectly reasonable at the time it was implemented in 2009 to protect the public from reckless bank lending, this also contributed to the wealth gap.

See: Real Estate — A Look at the Market 1 Year Ago vs. Now
Find: A New Grant for Black Americans Offers Free Money for a First Home

According to a report by The Ascent, less than 25% of Americans have a credit score above 760. That, perhaps, was the biggest contributor to the housing boom in the past year.

Credit score does not necessarily determine wealth, but the surge in prices, down payment requirements and the contribution of a small number of the population inundating an already souped-up market gives a clear understanding as to where this purchasing power is coming from.

In April 2020, the unemployment rate increased by 10.3 percentage points to 14.7%. The Bureau of Labor Statistics notes that this was the highest and largest over-the-month increase in the history of the data, which dates back to 1948.

See: Expert Tips To Fix Your Credit on a Limited Income
Find: What the Unemployment Rate Means for You and the Economy

Currently, the unemployment rate is around 6%, considerably down from 11 months ago, but the BLS notes that it is still 2.5 percentage points higher than its pre-pandemic level in February 2020. In short, four million more people are still unemployed now than were a year ago. So what does this mean for the average American?

Most Americans have been staying put. The typical American homeowner  in 2020 had been in their home for 13 years the WSJ reports. In 2010, that number was just 8.7 years. The pandemic also caused fears of people entering homes and made the process more difficult. Fewer homes on the market led to a supply crunch, which further drove prices up.

If you are thinking of selling your home, it’s certainly the time to do it.  Not because there is necessarily a greater number of buyers, but because there are enough willing buyers with enough capital to meet restricted supply.

See: Houses Are Selling the Fastest in These 10 Real Estate Markets
Find: Why Supply and Demand Is Important to You and the Economy

The  aftershock of the housing crash all the way up to 2020 provided an amenable environment for increased home purchases. Interest rates have been held historically low in an effort to aid economic recovery. This made it easy for buyers who started panic buying homes mid-pandemic to swiftly make decisions.

Given that wealthier Americans disproportionately participated in purchasing homes the past year, it is difficult to compare it to the housing bubble of 2007.

For those who have been hearing of “booms,” “surges” and “frenzy” amidst the housing market, fret not — not everyone you know is out there buying a home.

The economy is still well on its way to recovery. Federal Reserve Chairman Jerome Powell said in a statement before the House Financial Services Committee, “The recovery has progressed more quickly than generally expected and looks to be strengthening, but the recovery is far from complete.”

Higher than average unemployment and still pending uncertainties about work locations and environments might not spell buy-time for most Americans. While those with a lot of cash on hand and the financial means to purchase swelled the market the past year, the frenzied buying could be just that.

According to a CNN report, people who already owned high-end property before the pandemic are seeing their wealth grow as the luxury end of the market booms. And meanwhile, being able to afford a new home is getting farther out of reach for those looking to buy in the low and middle tiers of the market.