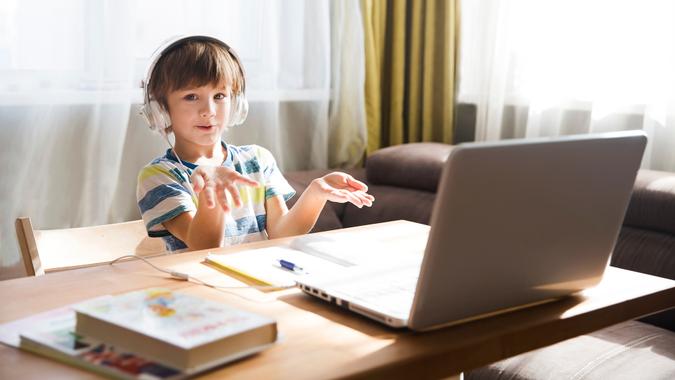 A new report from the United Nations and the World Bank revealed that children across the globe could lose as much as $17 trillion in lifetime earnings due to pandemic-related school closings. Could COVID’s impact on the economy at large trickle down for generations to come?

See: As Child Tax Credit Expires, Over 21 Million Americans Face Food Insecurity
Explore: 52% of Parents Have Little to Nothing Saved for Their Children’s Future — How To Get Started Now

A report in April 2020 pinpointed that figure at $2.5 trillion for American children, specifically, which was 12.7% of our annual Gross Domestic Product. However, that number was calculated based on global lost earnings of $10 trillion after just four months of virtual or closed schools. Those calculations estimated that the U.S. economy represents roughly one-fourth of global output.

If this remains true, and the number of lost potential earnings as a result of COVID-related school closures has increased to $17 trillion, now American students could lose $4.25 trillion in the coming decades.

Lost income opportunities, according to an NPR interview with NPR education correspondent Anya Kamenetz, could disproportionately affect children in lower income countries, but even the effect it will have on American children is profound.

“It tracks the inequities that we see all over the place,” Kamenetz told NPR host Elissa Nadworny. “It’s poorer children. It’s children with disabilities. And it’s girls.”

She noted that, without basic life skills such as being able to read a sentence in their native language by age 10, many children would be forced into working at a young age in lower income jobs. Girls in lower-income countries could be forced into childhood marriage.

Across the world, according to a paper by the Organization for Economic Cooperation and Development, students in grades 1 through 12 affected by school closures could expect 3% lower income over their lifetimes. It could reduce national GDPs by 1.5% annually for the coming century, the report said. Again, this is due to a skills gap and lack of earning power for their students.

“Home environments are often not designed to support learning the way that schools are,” wrote Conrad Hughes, Research Associate at the University of Geneva’s department of Education and Psychology in TheConversation.com.

Students who miss these critical, foundational learning years may have problems learning new concepts in the future, as we tend to learn by assimilating new information to old. “It’s like a house being built without foundations,” he explained.

However, in addition to keeping schools open as long as possible, there is still time to undo some of the damage caused by COVID-related school closures here in the U.S. and in developing countries, experts say.

First, invest in education, including supplemental education to help close the gap between lower income and upper-income families. Only roughly 3% of government COVID aid, so far, has gone to education, according to NPR.

Switching up teaching methods to be more flexible and personalized may also help in many situations. This strategy may require assistance from not-for-profit organizations to roll out the programs in areas that need them the most.

Learn: Outdated Views About Women and Money That Are Holding Us Back
Find: Should You Buy Groceries at the Dollar Store?

Lastly, keep schools open as long as possible, even as we fight and face the omicron variant, said Borhene Chakroun, director of the Division of Policies and Lifelong Learning Systems for UNESCO. “He says the rule should be to close schools last and open them first,” Kamenetz asserted in the NPR interview.