.S. trade deficit is a common news story. At $505 billion last year, it’s the largest trade deficit in the world. In fact, it’s more than four times larger than Great Britain’s trade deficit, the country with the second-highest debt.

How did the U.S. trade deficit grow to be so massive? Is it even possible to lessen the deficit moving forward? Read on to find answers to these questions and to get more information about how a trade deficit affects the greater economy.

A $505 billion trade deficit seems huge, but it pales in comparison to the size of the U.S. economy, which reported a gross domestic product (GDP) of $16.8 trillion last year. According to the World Bank, the import of goods and services as a percentage of GDP was 15.4 percent in 2015, much lower than some of the world’s biggest economies, including China (18.5 percent), Japan (18 percent) and Germany (39.2 percent). The higher the percentage, the more sensitive that country’s economy is to trade.

Also of Interest: How 9/11 Impacted the US Economy

Why the US Trade Deficit Is So Large

The U.S. dollar also affects the trade deficit. If the dollar strengthens, other countries cannot afford to buy as many goods, according to YiLi Chien, a senior economist at the Federal Reserve Bank of St. Louis. In contrast, if the dollar weakens, other countries can buy more American products, thus boosting exports and the U.S. economy. This activity might decrease the trade deficit, according to Chien.

Another reason might be that foreign countries impose high tariffs or other barriers to U.S. products to protect their own domestic industries, such as the Japanese car industry. Don’t forget that presidential policies can also affect trade and, therefore, the trade deficit.

US Trade Deficit by Country

Financial Friends: America’s Most Valuable Allies Around the World

Possible Steps to Lessen the US Trade Deficit

A trade deficit can be reduced by a variety of ways. For example, a country could depreciate or weaken its currency — like China has done. Such a move helps a country maintain its competitiveness in the international market.

According to the White House website, President Donald Trump and his administration have taken or intend to take the following steps to lessen the U.S. trade deficit:

Does a Growing Trade Deficit Signal a Faltering Economy?

Answering this question is more difficult than it might seem.

For example, say a U.S. company has determined to buy a product overseas because it is cheaper but then sells that product in the U.S. This can cost U.S. jobs. However, because the company bought the product for less, it might sell it for less to U.S. consumers, which helps consumers save money.

Then there is the inference that the national wealth is leaving the United States. In reality, trade partners like China often take trade profits and invest them in the U.S., particularly in Treasury securities. As of April, China held $1.09 trillion in U.S. Treasury securities. If a country like China decides it doesn’t like the U.S. trade policy, it can sell its bonds — but then it runs the risk of selling them at a loss, which is to the benefit of the buyer. These eager buyers include many Wall Street firms and at least 32 other countries that hold U.S. Treasury securities.

The third biggest was for financial services ($98.2 billion). This area includes commissions and other transactions fees associated with the purchase and sale of securities and noninterest income of banks. Other services provided by Americans overseas include transport, maintenance and repairs, telecommunication and computer services, insurance and government goods.

More on the Economy: What Another Fed Rate Hike in 2017 Means for Your Wallet 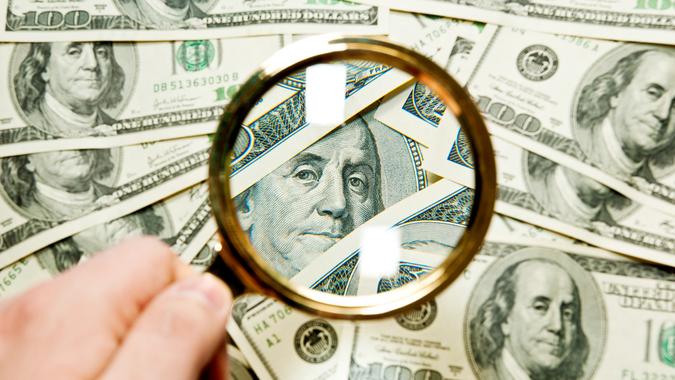 Spot fake and counterfeit money before it gets to your wallet.

> Money > Economy > How the US Created a $500 Billion Trade Deficit