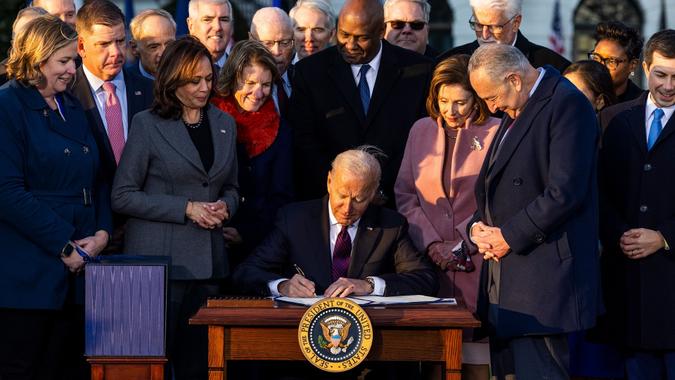 President Joe Biden finally signed into law the $1 trillion Infrastructure and Investment Jobs Act on November 15, but despite this major win for the administration, much work is still ahead before the year’s end.

Although Biden had released a trimmed-down framework for the separate $1.75 trillion Build Back Better economic bill, negotiations are still ongoing. In addition, the deadline is looming for the debt ceiling once again.

In a letter to his Democratic colleagues on November 14, House Majority Speaker Chuck Schumer said that he was “disappointed that we have not yet been able to reach a “topline” agreement on funding levels for FY2022 with our Republican colleagues.”

Related: Social Security: How to Boost Your Benefit by $800

Schumer added, however, that “it is likely that we will need to process a Continuing Resolution before December 3rd to give our Appropriators more time to finish their work,” according to his letter.

Addressing the Build Back Better Act in his letter, Schumer said that “on a bill of this magnitude, this process takes time and patience and I want to thank Chairman Sanders and his entire staff for their hard work and due diligence.” Timing of consideration of the BBBA in the Senate will largely depend on when the House sends us the bill and when CBO finalizes their scores for all of the committees.”

The Congressional Budget Office (CBO) said it “anticipates publishing a complete cost estimate for H.R. 5376, the Build Back Better Act, by the end of the day on Friday, November 19,” according to a CBO tweet.

CBO anticipates publishing a complete cost estimate for H.R. 5376, the Build Back Better Act, by the end of the day on Friday, November 19. https://t.co/Bluk2zHQsw

In addition, CNN reported that Speaker of the House Nancy Pelosi “told her colleagues that the House isn’t leaving for Thanksgiving until Build Back Better is passed, according to two sources familiar with the matter. There’s talk of a potential Saturday vote, but it could happen sooner than that depending on timing of information from CBO.”

Schumer concluded his letter by asking his colleagues to “please keep your schedule flexible for the remainder of the calendar year.”

“As you can see, we still have much work to do to close out what will be a very successful year of legislative accomplishments. I am confident we can get each of these important items done this year, but it will likely take some long nights and weekends,” he added.