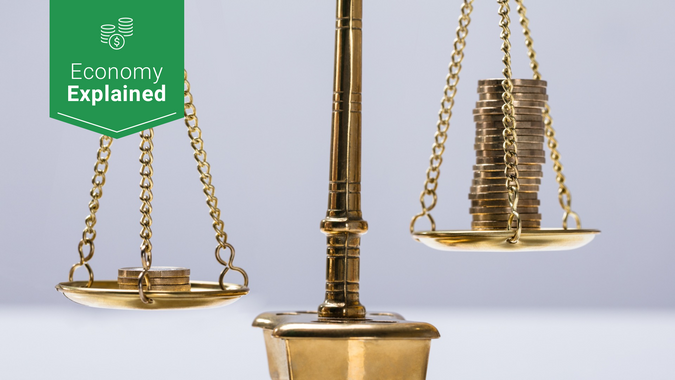 Economic inequality describes the uneven distribution of wealth, income, resources and opportunity to different groups of people in a society — something America knows plenty about. The last half-century has witnessed an incredible reverse-Robin Hood act as the rich got much, much richer while the rest didn’t have so much luck.

See: Understanding the Differences Between Inflation, Deflation & Stagflation
More: The Complicated Topic of Wage Inflation and the Controversy Surrounding It

The top 1% now takes in nearly 200 times as much as the bottom 90%, whose real wages have been stagnant for decades. In capitalist societies, some economic inequality is inevitable, but that kind of wealth disparity is bad news for both countries and individuals alike — and it’s not only the have-nots who pay the price.

Economic inequality is hardly unique to the United States. Rich and poor live side-by-side all over the world. But according to research from The Equality Trust, the consequences are the same irrespective of country and culture.

Across the world, the unequal distribution of resources is associated with greater economic instability and more frequent economic crises. The study found, for example, that:

That’s all very important, but you’re not in charge of a country, right? If you’re earning a salary you’re happy with, what does all this mean for you?

Read: How Do We Track Unemployment & How Accurate Is It?

Much of the reason that economic inequality is so stark in modern America is wage stagnation. The federal minimum wage has been $7.25 an hour since 2009, the longest Congress has ever let it erode in history. Inflation has risen at a rate of almost 24% since then. Presuming a 40-hour workweek, $7.25 an hour comes out to:

That’s before taxes and with no extra days off. Since that’s clearly not a survivable salary in modern America, the permanent underclass known as the “working poor” has swelled to 7 million people, according to the Bureau of Labor Statistics (BLS). They work — many of them full time — but their wages are so low that they depend on public assistance to subsidize their healthcare, purchase basic necessities and feed themselves and their families.

That means that the federal government uses tax dollars to subsidize the salaries of poor workers while those employers who pay the low wages pocket the difference as profit.

More Economy Explained: How To Calculate Your Debt-to-Income Ratio

Here’s how economic inequality in the United States affects you, even if you earn a good living.