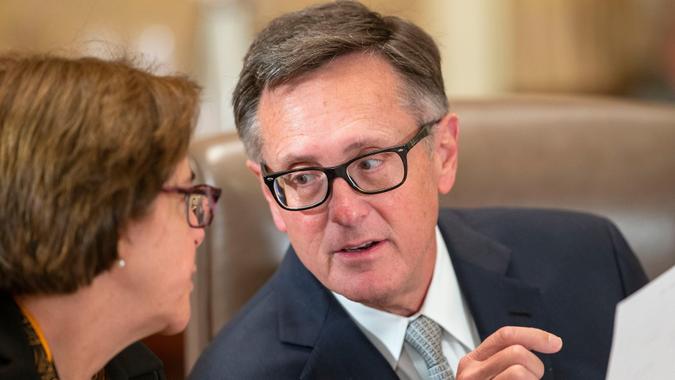 Fed Vice Chair Richard Clarida said today that the necessary conditions for raising interest rates will have been met by year-end 2022.

Economy Explained: How Interest Rates Affect Your Wallet and the Bigger Economic Picture
Learn: What Would the Benefit of Raising Interest Rates Right Now Be?

Speaking at the Peterson Institute for International Economics in Washington, D.C., Clarida clarified that “while, as Chair Powell indicated last week, we are clearly a ways away from considering raising interest rates and this is certainly not something on the radar screen right now, if the outlook for inflation and outlook for unemployment I summarized earlier turn out to be the actual outcomes for inflation and unemployment realized over the forecast horizon, then I believe that these three necessary conditions for raising the target range for the federal funds rate will have been met by year-end 2022,” according to his opening remarks.

He added that given this outlook and so long as inflation expectations remain well anchored at the 2% longer-run goal, “commencing policy normalization in 2023 would, under these conditions, be entirely consistent with our new flexible average inflation targeting framework.”

Read: Should the Fed Rethink Inflation as Delta Variant Scours the Country?

Last week, the Fed concluded its FOMC meeting and reiterated its stance on the “outcome-based, threshold guidance that specifies three conditions that the Committee expects will be met before it considers increasing the target range for the federal funds rate.”

These conditions are that “labor market conditions have reached levels consistent with the Committee’s assessments of maximum employment and inflation has risen to 2% and is on track to moderately exceed 2% for some time,” according to a statement last week.

In terms of the conditions in the labor market, Powell, appearing before the House Financial Services Committee last month to testify on monetary policy and the state of the economy, said that while they have continued to improve, “there is still a long way to go.”

“The unemployment rate remained elevated in June at 5.9%, and this figure understates the shortfall in employment, particularly as participation in the labor market has not moved up from the low rates that have prevailed for most of the past year. Job gains should be strong in coming months as public health conditions continue to improve and as some of the other pandemic-related factors currently weighing them down diminish,” he said.

The Labor Department will release the July unemployment rates on Friday.