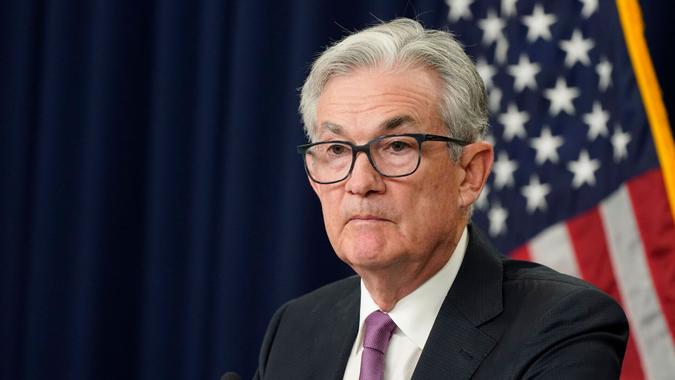 Amid four-decade high inflation, the Federal Reserve is widely expected to raise its interest rate by at least 75 basis points today, for the third consecutive time. And now, Goldman Sachs strategists say that the Fed won’t cut rates until 2024.

See: Stimulus Payments Coming to These States in September 2022
Find:Looking To Diversify in a Bear Market? Consider These 6 Alternative Investments

“A third “unusually large” hike would be a reversal from the plan Chair Powell laid out in July to slow the pace of tightening, despite little surprise on net in the data,” Jan Hatzius, Chief Economist and Head of Global Investment Research at Goldman Sachs, said in a note sent to GOBankingRates. “We see several reasons for the change in plan: the equity market threatened to undo some of the tightening in financial conditions that the Fed had engineered, labor market strength reduced fears of overtightening at this stage, Fed officials now appear to want somewhat quicker and more consistent progress toward reversing overheating, and some might have reevaluated the short-term neutral rate.”

But some analysts have a different view. Hayden Hughes, co-founder and CEO of Alpha Impact, said: “With all due respect to my friends at Goldman Sachs, bankers are notoriously inaccurate at predicting what the Fed will do. The reason is simple: The Fed makes data-driven decisions based on the prevailing economic indicators in the weeks leading up to their meetings.”

Hughes told GOBankingRates that many are comparing this period to the early ’80s when we saw sustained interest rates above 10%.

“Even during this period, rates were lowered and increased through the years. The market is certainly pricing sustained and continued increases in interest rates through the rest of 2023, but anything beyond that is a guessing game,” he noted.

Investors are also awaiting the Fed’s quarterly projections for the economy, including unemployment and inflation-indicators of the direction of potential future hikes.

Goldman Sachs added that it expects 50 bps hikes in November and December, taking the funds rate to 4-4.25% at year-end, and added  that the new economic projections “are likely to show GDP [gross domestic product] growth more materially below potential this year and next than in June, a slightly larger increase in the unemployment rate in the years ahead, and a bit more inflation this year and next.”

Chris Terry, Vice President of Enterprise Solutions at SmartFi, told GOBankingRates “today the Federal Reserve will raise rates by 75bps, the markets will be mixed as this is as expected.”

He added, however, that “inflation is out of control, and it is not enough to tame it. So I call this death by a thousand cuts with future rate hikes on the way.

“What does this mean for the consumer? Stalled equity and crypto markets, higher costs of credit, and until inflation is under control, more expensive food and energy. So cut cut cut for another six months? Who knows?”