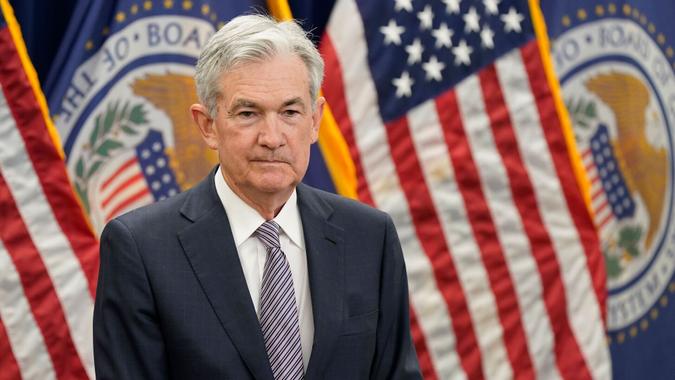 As expected, the Federal Reserve said it will raise interest rates by three-quarters of a percentage point rate, the first time it has done so since 1994. The move was widely anticipated and comes amid a market that has entered bear territory and inflation at a 41-year high.

See: May Inflation Reaches Highest Level Since 1981, Touches Every Sector of the Economy
Find: Inflation Could Push The Fed to Have a ‘Volcker Moment’ And Drastically Raise Rates

Chair Jerome Powell said in a press conference that given the inflation which has risen notably since March, “a larger increase was warranted at today’s meeting,” adding that it is “an unusually large one.” He added that the CPI data came last week “and we thought that we needed to go ahead so we did.”

“We came to the view that we wanted to do more front-end loading. It was about the speed,” he said.

Rusty Vanneman, chief investment strategist at Orion Advisor Solutions, told GOBankingRates that given the recent inflation prints and news, the 75-basis point increase in federal fund rates was in line with expectations coming into today.

“It’s a good move by the Fed in my opinion, which is trying to regain the narrative and its credibility fighting inflation. This is the biggest single-day increase in FF since 1994, a day I remember well, but I’m not expecting the same sort of fireworks of that day back in 1994 given the Fed’s management of expectations,” Vanneman said. “Today is important, but the Fed needs to continue to stand strong in the face of rising inflation expectations.”

The Fed seemed cautiously optimistic in its statement, saying that “overall economic activity appears to have picked up after edging down in the first quarter. Job gains have been robust in recent months, and the unemployment rate has remained low. Inflation remains elevated, reflecting supply and demand imbalances related to the pandemic, higher energy prices, and broader price pressures.”

The Fed added that “the invasion of Ukraine by Russia is causing tremendous human and economic hardship. The invasion and related events are creating additional upward pressure on inflation and are weighing on global economic activity. In addition, COVID-related lockdowns in China are likely to exacerbate supply chain disruptions. The Committee is highly attentive to inflation risks.”

The Fed also lowered drastically its GDP outlook as according to FOMC officials’ projections, GDP growth will be at 1.7% in 2022, compared to the projected 2.8% in March.

The PCE (personal consumption expenditures) is also projected to increase 5.2% in 2022, compared to the 4.3% projected in March, according to Fed meeting participants projections, released June 15.

Tim Holland CIO, Orion Advisor Solutions, told GOBankingRates that “we think the market will take great comfort in the Fed affirming — through word and action — its inflation-fighting credentials.”

“We also think the market will find the Fed’s lowering of its expectations for the economy this year as quite credible and appropriate.  Those are all positives, in our opinion,” he said. “The risk with a 75bps move in June, and the possibility of another one at the July meeting, is the Fed does indeed go too far, too fast, putting the economy at risk of recession.”

The Fed participants seemed more optimistic about the near-term future, with PCE inflation expected to lower to 2.6% in 2023 and 2.2% in 2024. These estimates remain fairly unchanged from the March ones, which stood at 2.7% and 2.3%, respectively.

Jeffrey A. Rosenkranz, Portfolio Manager, Shelton Capital Management, told GOBankingRates that while the 75 bps increase was expected, more notable is the significant shift higher in the dot plot, with median rates in 2023 now 3.8%.

“Five of the Fed governors even foresee rates above 4% next year,” he said. “The Fed was behind the curve and is now running to try and get ahead of it.  The market essentially bullied them into this move even though there are early signs of an economic slowdown; just today the Atlanta Fed updated their Q2 GDP forecast down to 0% growth.”

According to him, the Fed will keep raising rates to follow through on forward guidance and meet market expectations but will inevitably overcorrect.  Short-term rates will go higher, but for intermediate and longer-term rates, the market will start to see-through the rate hike cycle and start pricing in the eventual rate cuts necessary to bring the economy out of a recession.

In May, the Fed raised interest rates by half a percentage point — the first time since 2000 — and said it would start reducing its holdings of Treasury securities, agency debt and agency mortgage-backed securities on June 1.

The Fed added that the sectors most adversely affected by the pandemic remain weak but have shown improvement.

Live Richer Podcast: Why Inflation Is Making Your Paycheck Worth Less
Inflation Impact: 2012 Prices Compared to 2022 May Not Be as Drastically Different as You Think

“Inflation has risen, largely reflecting transitory factors. Overall financial conditions remain accommodative, in part reflecting policy measures to support the economy and the flow of credit to U.S. households and businesses. The path of the economy will depend significantly on the course of the virus. Progress on vaccinations will likely continue to reduce the effects of the public health crisis on the economy, but risks to the economic outlook remain,” the board said.