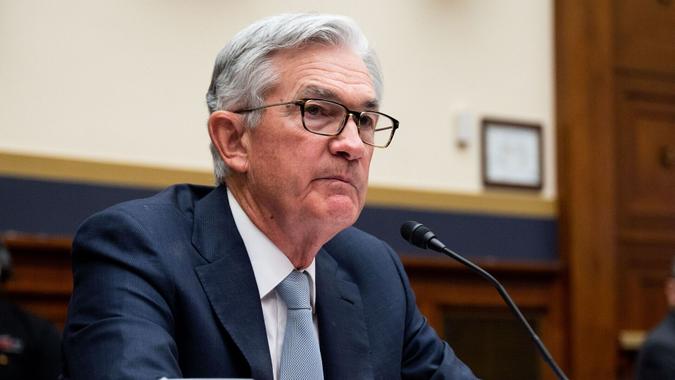 The full impact of the war in Ukraine and the subsequent global sanctioning of Russia on the world economy now and moving forward is uncertain, to say the very least. Closer to home, the U.S. Federal Reserve is dealing with economic consequences no less certain, but certainly troubling.

See: Economists Keep Saying This Isn’t 1980s Inflation, But What Does That Mean?
Find: The Current Inflation Rate Is Scary, but Not as Scary as It Was During Other Periods of Recent History (Infographic)

With inflation rising to 7.9% last month and consumer prices the highest in 40 years, Russia’s widely condemned invasion of Ukraine has upset global energy markets that were already weakened by the COVID-19 pandemic. The result is much higher gas and oil prices in the U.S. and widespread belief that a prolonged trend of high inflation will be difficult to reverse without the country falling into a recession.

Chairman Jerome Powell and fellow Federal Reserve officials have long-faced criticism for failing to act sooner to curb inflation. Although Powell had discussed taking steps to combat inflation with rate increases prior to the Russia-Ukraine war, the conflict has compounded the global supply chain disruptions.

“Hindsight says we should have moved earlier…. But there really is no precedent for this,” Powell is quoted as saying, according to the Wall Street Journal.

With the Russian invasion causing volatility across an already unstable supply market and world economy, implementing sharp rate increases would be a risk that Powell and the Feds will not take. A quarter-point percentage increase is expected this week instead of a half-point raise, which some officials and financial experts were recommending. Additional increases will follow throughout the year but whether they are effective enough to have a significant impact on inflation rates will remain to be seen.

While some economists believe that inflation may peak soon, a new “perfect storm” of continuing supply bottlenecks, worrisome labor shortages, market unpredictability, post-pandemic recovery, and fallout from the ongoing Russia-Ukraine war and the changes Russia’s role in global energy and other commodity markets, many feel a prolonged period of high-and-rising inflation or an economic recession is unavoidable, says NBC News.

When asked by Sen. Richard Shelby at a hearing on March 3 if he would be prepared to follow the lead of Paul Volcker, the former Federal Reserve Chairman who fought inflation by prompting a recession in the 1980s by raising federal funds rates and prime rates, the WSJ reported Powell stated, “I would hope history will record that the answer to your question is yes.”