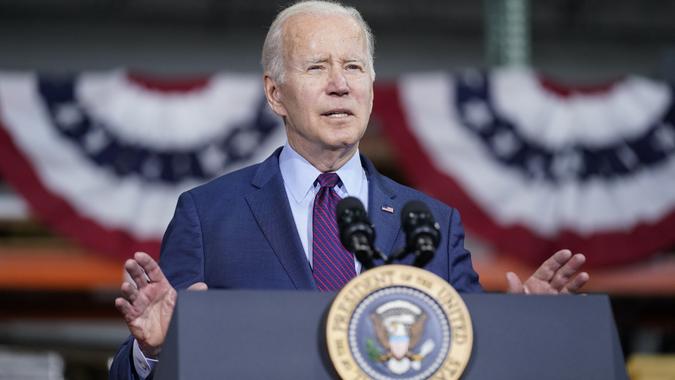 Anyone hoping that gas prices might already have peaked got some bad news on Monday, as average prices hit a new all-time high and left some industry watchers speculating that prices at the pump could soon reach a once unfathomable $4.50 per gallon.

This has not improved the moods of consumers and experts who are ready to point the blame somewhere — and many are pointing it firmly in the direction of President Joe Biden.

The average price of a gallon of unleaded gasoline hit $4.374 a gallon this week, according to AAA. That’s the highest recorded price on record, topping the previous record of $4.33 set on March 11. Many states are well above the national average, especially California, where citizens are paying over a dollar more at $5.84 per gallon of regular.

Andy Lipow, president of Lipow Oil Associates, told CNN on Sunday that he expects retail prices to reach $4.50 a gallon in the next week to 10 days.

A rising chorus of critics say Biden’s energy policies are to blame. They cite several reasons, including his administration’s rush to embrace renewable energy at the expense of fossil fuels, his cancellation of the Keystone XL pipeline, and his decision to stop importing Russian oil.

Even before this year’s surge in gas prices, critics were questioning the Biden administration’s energy policies.

Bryan Bashur, a federal affairs manager at Americans for Tax Reform, wrote in a December 2021 op-ed for The Hill that the Biden administration “exacerbated the inflation of gas prices by both restricting the supply of oil and pressuring banks and asset managers to divest from traditional energy projects. The result of these flawed policies is weakened purchasing power for consumers and more reliance on foreign countries to keep the United States powered.”

Biden also “bear[s] responsibility” for his decision to stop importing Russian oil following its invasion of Ukraine, thus triggering a surge in oil prices, according to Robert Rapier, a veteran chemical engineer who has worked in the oil and gas industry.

“You may believe that banning Russian oil was the right move, but it does impact gasoline prices,” Rapier wrote in a column for Forbes two months ago. “It is arguably the first decision President Biden has made that had an immediate, short-term impact.”

But others say blaming Biden is misguided because it fails to account for a series of events he had no control over. They point to the COVID-19 pandemic, which even Rapier concedes “crushed oil demand in 2020” and left the oil industry playing catch-up when demand rebounded.

“Rising oil prices — in response to insufficient supplies — are the predominant reason for the surge in gasoline prices,” Rapier wrote.

Patrick De Haan, head of petroleum analysis for GasBuddy, offered a similar take in a recent interview with The New York Times.

“Covid changed the game, not President Biden,” De Haan said. “U.S. oil production fell in the last eight months of President Trump’s tenure. Is that his fault? No. The pandemic brought us to our knees.”

Meanwhile, Russia’s invasion of Ukraine changed the landscape even further.

“When you throw a war on top of this, this is possibly the worst escalation you can have of this,” Abhiram Rajendran, head of oil market research at Energy Intelligence, said in an interview with The New York Times. “You’re literally pouring gasoline on general inflationary pressure.”

Because these factors are out of Biden’s control, many experts say he has been unfairly blamed for rising gas prices even as they wish he would adopt a friendlier attitude to the oil and gas industry.

POLL: Do You Think the Government Should Increase SNAP Benefits?
Discover: A History of Gas Prices: Do You Remember How Little You Once Paid?

The Biden administration has been “clearly less friendly” to the industry than previous administrations, De Haan told the NYT. But overall, he added, the administration’s stances and policies have played a “very, very small role” in pushing gas prices higher.