Who Is Getting Vaccines? Survey Notes Income Disparity in Vaccine Recipients 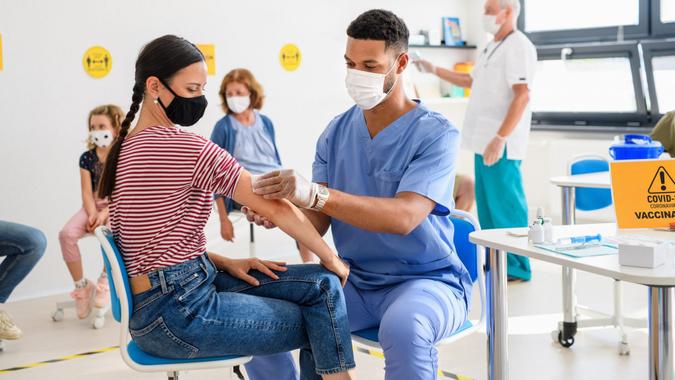 Although COVID-19 vaccinations are available free of charge to all U.S. residents, lower-income Americans making less than $30,000 annually are less likely to have received a vaccine than those making $75,000 a year or more, according to an Investor’s Business Daily study.

Vaccinations are covered by the federal government based on multiple stimulus packages passed last year, and the administration fees can be reimbursed to providers through the patient’s public or private insurance company, according to the U.S. Centers for Disease Control website. Uninsured patients will be covered by the Health Resources and Services Administration’s Provider Relief Fund, and no one will be turned away if they can’t pay the administration fee, the CDC says.

Nonetheless, the disparity between lower income and middle-income Americans getting their vaccines exists. More than four in 10 people earning at least $75,000 a year received a vaccine, and that number declines as income drops, IBD reports. Only 17% of those making less than $30,000 per year have been inoculated to date.

See: Stimulus Payments Drive 10% Increase in Personal Income in January
Find: States Where the Rich Get Richer and the Poor Get Poorer

Nearly Three-Quarters of Americans Plan to Get a Vaccine

While these numbers may be alarming, the good news is that 74% of all Americans have already received a vaccine or are waiting to receive one. Only 26% of Americans say they don’t plan to get the vaccine, and almost two-thirds say they trust it. Additionally, 64% said they were confident in the safety and efficacy of the vaccination, while 28% said they were not confident. Less than 10% weren’t sure or declined to answer, IBD reports.

See: Women’s Savings Are Shockingly Low – Inside the Gender Money Gap Made Worse by COVID-19
Find: Can Employers Require You to Get The Vaccine… Or Else?

The stocks of the major vaccine developers and distributors right now, including Moderna, BioNTech, Pfizer and Johnson & Johnson, all rose Monday with news of FDA approval of Johnson & Johnson’s single-dose shot. Even with the jump, Investor’s Business Daily says Johnson & Johnson remains narrowly in the buy zone, with shares slightly below the 50-day moving average.

However, IBD urges caution, as the stock earns only a 48 out of 99 composite rating. The company seems lackluster when it comes to key growth measures and has been plagued by settlements and lawsuits in recent years, IBD reports.