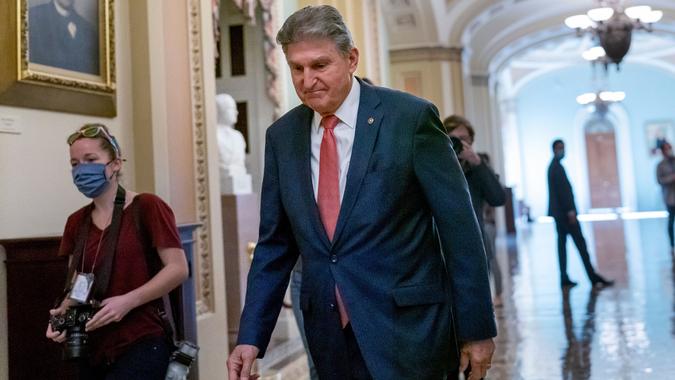 Following months of negotiations, Senator Joe Manchin said he opposed President Biden’s trimmed down $1.75 trillion Build Back Better economic bill on Dec. 19, effectively killing it, at least in its current form. Following Manchin’s statement on Sunday, Goldman Sachs said it was downgrading the country’s GDP. Goldman Sachs Chief Economist Jan Hatzius said on Dec. 19 that the failure of the bill would slow economic growth in 2022, according to a note sent to GOBankingRates.

Compare: Which Counties Across the US Grew and Fell the Most in GDP Last Year?
Plan Ahead: No Child Tax Credit in January? Here’s How to Prepare for the Worst

“BBB enactment had already looked like a close call, and in light of Manchin’s comments, we are adjusting our forecast to remove the assumption that BBB will become law ,” Hatzius said in the note. “While BBB in its current form looks unlikely, there is still a good chance that Congress enacts a much smaller set of fiscal proposals dealing with manufacturing incentives and supply chain issues. There is also still a chance that Congress retroactively extends the expanded child tax credit, with some modifications, though we think the odds of this occurring are less than even.”

“With headline CPI reaching as high as 7% in the next few months in our forecast before it begins to fall, the inflation concerns that Sen. Manchin and others have already expressed are likely to persist, making passage more difficult,” Hatzius added. “The omicron variant is also likely to shift political attention back to virus-related issues and away from long-term reforms.”

According to Goldman Sachs, the most important question for the near-term outlook is the fate of the expanded child tax credit. Another issue is that most Fed officials likely expected the BBB Act to become law, and a failure to pass it would introduce some risk to our expectation that the FOMC will deliver the first rate hike on March. 6, according to the note.

“While the apparent demise of the BBB legislation has negative implications for near-term consumption, for financial markets there are also likely to be some offsetting positive effects. The odds of corporate tax increases have now declined, for example, which our equity strategists had estimated would reduce S&P profits by 3%,” according to the note.

In a scathing statement following Manchin’s comments, Press Secretary Jen Paski said that “if his comments on FOX and written statement indicate an end to that effort, they represent a sudden and inexplicable reversal in his position, and a breach of his commitments to the President and the Senator’s colleagues in the House and Senate,” according to the statement.

“Senator Manchin claims that this change of position is related to inflation, but the think tank he often cites on Build Back Better — the Penn Wharton Budget Institute — issued a report less than 48 hours ago that noted the Build Back Better Act will have virtually no impact on inflation in the short term, and, in the long run, the policies it includes will ease inflationary pressures. Many leading economists with whom Senator Manchin frequently consults also support Build Back Better,” the statement continued.

As for Manchin, he also issued a statement: “I have always said, ‘If I can’t go back home and explain it, I can’t vote for it.’ Despite my best efforts, I cannot explain the sweeping Build Back Better Act in West Virginia and I cannot vote to move forward on this mammoth piece of legislation.”

“My Democratic colleagues in Washington are determined to dramatically reshape our society in a way that leaves our country even more vulnerable to the threats we face. I cannot take that risk with a staggering debt of more than $29 trillion and inflation taxes that are real and harmful to every hard-working American at the gasoline pumps, grocery stores and utility bills with no end in sight,” he added.