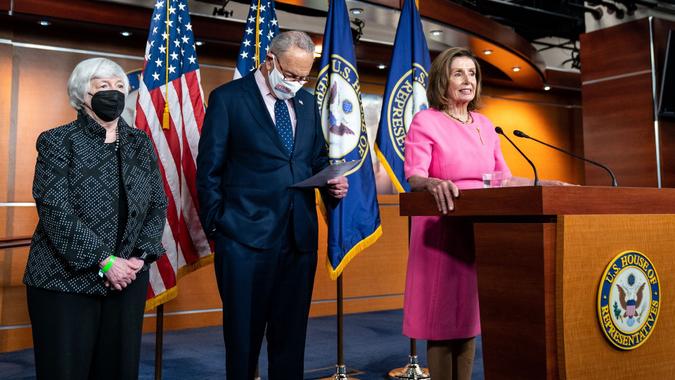 With another potential government shutdown looming, many Americans might be wondering (again) how their monthly Child Tax Credit payments will be affected. For now, it looks like the advance payments due on Dec. 15 are safe — at least according to recent comments from Treasury Secretary Janet Yellen.

That’s the case even though the U.S. government is set to shut down on Dec. 3 unless Congress approves more funding to keep it operating through the end of the year, CNBC reported. This is the same scenario that lawmakers faced back in late September, when Congress approved a measure to fund the government through early December. As GOBankingRates reported at the time, that stopgap vote came only hours before the government was due to run out of money.

Even if no such deal is struck this time around, Americans should still get their advance CTC payments. In a Nov. 16 letter to Congress, Yellen said the Treasury Department will be able to fund the government through Dec. 15 — the same day families are due to get their final advance CTC payments for the year.

“My guess is that they’ll make the payment — not doing so would be very disruptive to many families,” Elaine Maag, a principal research associate at the Urban-Brookings Tax Policy Center, told CNBC.

Beyond that, it’s anybody’s guess what will happen. President Joe Biden and House Democrats have included a one-year expansion of the enhanced CTC in their version of the Build Back Better plan, but the Senate might push back against that provision when it votes on the plan.