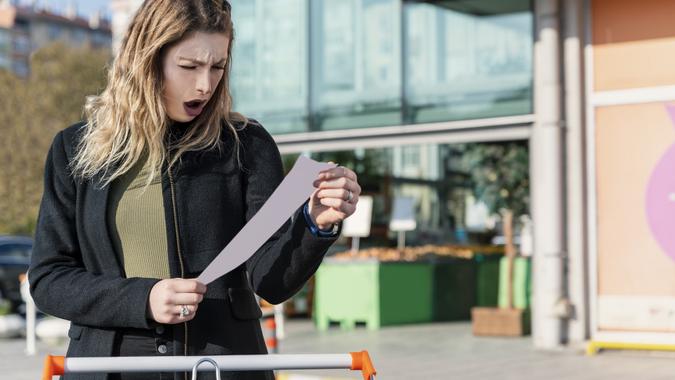 The war in Ukraine and climate change are affecting the world’s food supply, and we are going to continue seeing the effects of the shortage, according to one United Nations official.

Explore: Are We in a Recession Yet? GDP Shows Economy Shrank Two Consecutive Quarters
Find: This Credit Score Mistake Could Be Costing Millions of Americans

Speaking with Yahoo Finance, U.N. World Food Programme (WFP) Chief Economist Arif Husain said the situation is the “story that keeps getting from bad to worse.”

In a new report titled, “2022: A Year of Unprecedented Hunger,” the WFP noted that “as many as 828 million people go to bed hungry every night,” and there are 50 million people in 45 countries across the globe that are nearing famine levels. The number of people facing food insecurity has risen at alarming rates over the past three years, increasing from 135 million people in 2019 to 345 million in 2022.

According to the WFP, countries most affected include Yemen, Nigeria and South Sudan, and there is a “ring of fire” that stretches from Afghanistan to Haiti where humans are reaching critical levels of starvation.

Of course, the time period since 2019 has provided unprecedented complications in food supplies due to COVID, but there are also some other global factors accelerating shortages.

One of the major catalysts is the ongoing war in Ukraine — which, along with Russia, make up 30% of the world’s supply of wheat, 20% of maize and 70% of sunflower products, according to the WFP. And roadblocks to exporting those goods has been detrimental. Russia also exports a large quantity of fertilizer that is needed to grow crops. Husain said this conflict alone has impacted 50 million people who are now facing food insecurity.

More: SNAP for Seniors: How Rhode Island Is Making Strides Against Food Insecurity Among Elderly

The other ongoing problem is the effects of climate change that have depleted crops. The United Nations Foundation has said that “climate change is putting food production at risk” with extreme heat, droughts and severe weather likely reducing global yields by 30% as of 2050. In this year alone, heat waves in Europe and India and record rain in Texas have been major factors.

All of this is driving up the cost of food, as well, with less supply and more demand. As of July’s Consumer Price Index, the cost of groceries have risen 13.1% over the past 12 months. And things are not looking to get better from there.

Reuters reported that The World Bank believes the price of wheat could increase more than 40% by the end of 2022 unless the conflict in Ukraine and droughts in Argentina and Brazil come to an end. That means the costs of bread, cereal, baked goods and other foods using wheat will continue to rise.

The lack of access to fertilizer and severe weather will likely continue to drive up prices of produce as well, said Reuters. “The sharp rise in fertilizer prices, as countries avoid buying from major producers Russia and its ally Belarus, could discourage farmers from applying adequate crop nutrients to their fields. That could bring down yields and result in lower production,” the agency said. According to the CPI, fruits and vegetables are up 9.3% over the past 12 months.

Plan Ahead: Here’s How To Handle the Impending Candy Shortage This Halloween
Compare: 16 Ways To Save Money on Food Now That Prices Are Rising

Other interventions to help the food crisis, according to the WFP, include a global commitment to the Paris Agreement to help provide tangible ways to stop global warming, more critical international funding to help turn barren land into fruitful farmland and investments from private sectors to help provide infrastructure.