A balance sheet is a snap shot of your wealth, net worth or equity. It’s the difference between what you own and what you owe. According to the Census Bureau’s most recent report, the U.S. household median net worth was just over $80,000 in 2013. Even if you don’t have that much to your name, you definitely have a better financial report card than the U.S. government.

Unfortunately, our government has a big, ugly balance sheet that is only getting worse. According to USAFacts, which gathers data from the Federal Reserve, America was about $5.3 trillion in debt at the end of 2016. The culprit was the Fed, with a $12.7 trillion deficit that swamped the $7.3 trillion the states had managed to earn.

Here’s a look at what led the U.S. government to owe so much more than it owns and the outlook for the years ahead.

In the five years after the 2007 housing crash, the Feds piled on debt at an astonishing pace to pull us out of the Great Recession. In fact, they ended up doubling the national debt. Here are the annual records of the country’s debt following the start of the Great Recession, according to the U.S. Treasury:

According to the National Bureau of Economic Research, the Great Recession lasted from December 2007 to June 2009. During this time, government bailouts to the banks that were once thought to be “too big to fail” increased the country’s debt to a seemingly insurmountable rate.

See: Tony Robbins on Why You Need a Recession Plan Now

Monetary policy — which is the practice of lowering interest rates to boost the economy and introducing rate hikes to cool it — is controlled by the Federal Reserve. The Fed conducts “open market operations,” which involve buying government and mortgage-backed securities to increase the money supply and stimulate the economy. Specifically, these purchases go toward supporting U.S. employment and managing inflation.

These purchases have grown more than fivefold from $869 billion in August 2007 to $4.5 trillion in June 2017. Unfortunately, while the Fed’s actions might have ended the Recession, they haven’t boosted economic growth much. This “recovery,” while long at eight years, has featured growth at a much slower rate than previous rebounds.

Check Out: 6 Ways Private Companies Are Stepping in for the Government

Among the assets on the Fed’s balance sheet is $1.3 trillion in net loans receivable. Most of these are student loans. Some experts feel that defaults on such debt could cause our next financial crisis. Unfortunately, 44.2 million Americans have student loans. Their average burden is $37,172 borrowed and $351 due per month. Delinquencies — or debts past 90 days due — are a startling 11.2 percent. This would make sense if the unemployment rate were high, but the country is currently seeing its lowest unemployment rate in 16 years, at just 4.3 percent in June 2017.

At the end of the 2016 fiscal year, the U.S. had $23 trillion in total liabilities, or debt due. The bulk of it, or $14 trillion, was held by the public in the form of mortgages, credit card debt and various types of loans. The other significant creditors — with $7 trillion owed — were benefits accrued to federal employees and veterans.

Investors, mostly our citizens, buy U.S. debt to earn a relatively riskless return. Bills, notes and bonds issued by our Treasury Department are the most popular securities. Investors receive interest payments on the bonds, paid for by the Fed. In the 2015 fiscal year, the Treasury’s tab to cover interest expenses was $229 billion, or six percent of total federal spending.

Our budget deficit was $587 billion in fiscal 2016 and our last surplus was in fiscal 2001 — so what are we spending on that’s forcing debt to pile up?

In the 2015 fiscal year, total federal spending was $3.8 trillion. Sixty-four percent of that, or $2.45 trillion, was mandatory. This puts us in a budgetary bind every year. Our largest financial commitments are Social Security ($1.25 trillion) and Medicare ($985.7 billion).

Depending on your perspective, U.S. discretionary spending might not be discretionary at all because 54 percent of the total $1.11 trillion goes toward funding the military. The 2010 War on Terror pushed defense spending from 3.5 percent of gross domestic product (GDP) — the measure of America’s economic earnings — to nearly 6 percent by 2011. However, it has fallen ever since.

Work With What We’ve Got

Sadly, 70 percent of federal spending is fixed and non-negotiable — with 64 percent for mandatory items, chiefly Social Security and Medicare, and 6 percent for interest payments. So though we might need to reform the entire budget, it looks like we only can slice and dice the 30 percent of U.S. expenditures in which there’s some leeway.

Up Next: Healthcare Costs Are America’s No. 1 Financial Burden, Survey Finds 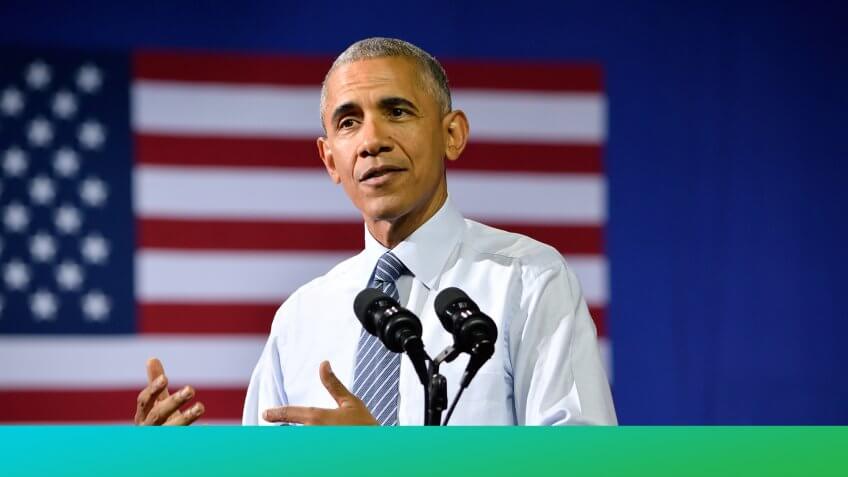 20 Trillion Dollars and Counting: US Debt by President

There are many factors that contribute to national debt. Are these presidents responsible?

GOBankingRates > Money > Economy > You Have a Higher Net Worth Than the US Government: Here’s Why