Home Prices Rose Nearly 20% in February: When Will They Start Heading Down? 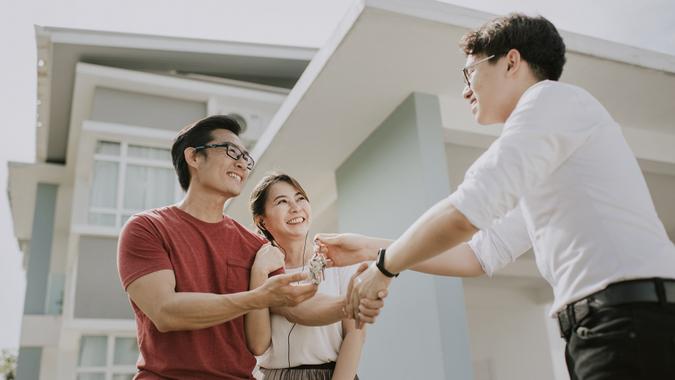 Home prices continued to barrel ahead in Feb. 2022, rising nearly 20% for the month vs. the previous year, according to the latest S&P CoreLogic Case-Shiller national home price index.

Discover: How To Get Rich With a Normal Job
More: 20 Genius Things Mark Cuban Says To Do With Your Money

Once again, cities in the South led the monthly gains, with Phoenix, Tampa and Miami posting annual home price increases of 32.9%, 32.6% and 29.7%, respectively. All 20 cities saw higher prices in Feb. 2022 than in January. The smallest February price gains on the 20-city index were recorded by Minneapolis, New York and Washington, D.C., though all three still logged double-digit increases.

The question now is how much longer home prices can keep posting such extreme gains month after month — particularly as rising mortgage rates threaten to cool buyer interest.

“The macroeconomic environment is evolving rapidly and may not support extraordinary home price growth for much longer,” Craig Lazzara, managing director at S&P DJI, said in a press release. “The post-Covid resumption of general economic activity has stoked inflation, and the Federal Reserve has begun to increase interest rates in response. We may soon begin to see the impact of increasing mortgage rates on home prices.”

As CNBC noted, mortgage rates began to climb slowly at the start of 2022 but have risen much more sharply since March. The February home price index doesn’t reflect the impact of recent rate hikes.

“We may see still another rush of prospective buyers looking to snag properties and increasing their offers to out-bid the competition, leading to another bump in housing prices overall,” Steve Reich, COO of Finance of America Mortgage, said in an email statement to GOBankingRates. “Of course, this trend may be short-lived given the recent surge in interest rates that we’ve seen over the past few weeks, and time will tell what the effects of prolonged inflation might be on the number of units that can come to market.”

See: POLL: Do You Think States Should Suspend Their Gas Taxes?
Find: Who’s Looking To Buy Your House? Surprising Characteristics of Today’s Homebuyer

“Looking ahead, I expect prices will rise more significantly outside major metro cities and in up-and-coming rural and suburban areas where professionals and their families are looking to relocate thanks to work-from-home flexibility,” Reich said.